Heath Fogg Davis talks to Alexander “The Engineer” Lim, host of AuthorStory by alvinwriter.com about his book, Beyond Trans: Does Gender Matter?

“I think everybody has a right to self-determination, including sex identity.” ~Heath Fogg Davis 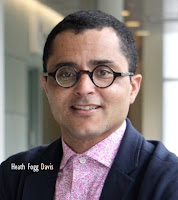 Heath is a professor who teaches at Temple University in Philadelphia who teaches courses related to social identity and anti-discrimination law, looking into policies intended to counter discrimination. Lately, he has been focusing on gender identity and how this relates with racial and class identity. He considers himself to be an activist who works on gender and civil rights in Philadelphia as well as throughout the United States and also does consulting work with businesses and other organizations, helping the latter frame their gender policies to make them inclusive for all gender identities. Heath also remarks that he is a trans man, which makes him somewhat invested in these issues.

For Heath, the question, “Does gender matter?” isn’t a rhetorical one. He notes that the assumption that gender matters is incorporated into everything from gender markers in legal documents to the way rest rooms are designed. While Heath remarks that gender does matter socially, based on his research, Heath’s answer to that question is “No,” where administrative policies are concerned. Heath notes that writing the book was fun to write, particularly when it came to the concerns raised by the subject matter as well as how to write the book in a way that it would be accessible to the average person. He remarks that a lot of people do want to do right by others, such as trans people, and thus hopes that his book opens up a discussion on, and provides some answers to, transgender issues.

LGBT, according to Heath, stands for “Lesbian Gay Bisexual Transgender,” and sometimes, at present, Q for “Queer” and I for “Intersex” are sometimes added at the end of that term. LGBTQ is thus an umbrella term designed to cover a wide spectrum of individuals who don’t identify under the classic genders of male and female. Transsexuals are individuals who identify differently from the gender noted to them at birth, such as male-assigned individuals who identify as female and vice versa. He notes that the physiological features by which gender is defined don’t always necessarily fit in with the standard definitions, and that carries into the way these individuals carry themselves in society. Heath admits that he isn’t an expert on biology, but remarks that he views sexuality as a scale, rather than two entirely separate categories.

Heath uses the use of public bathrooms as an example that most people are likely to relate to, where impact is concerned. He notes that those who do not conform to the usual standards of male or female get hassled when using, or attempting to use, such facilities, with potentially embarrassing consequences for the person involved. Heath thus argues that public bathrooms should be designed in a way that protects people’s privacy while avoiding gender identity discrimination. He notes that people who view such issues and scenarios dismiss these as trivial matters can say that because they haven’t experienced discrimination in that way. Heath mentions that there are various organizations presently working to expand gender identity so that sex-discrimination laws don’t just cover women being discriminated against by men or vice versa.

Heath remarks that thinking about these kinds of discrimination can negatively affect the great majority, those who identify with the traditional gender models. One example is a man changing his infant daughter’s diapers in the men’s public restroom, which presently violates the rules of the use of such facilities, while another example would be a female teacher needing to bring her male charge into the women’s public restroom so he could relieve himself. The same issues also apply, Heath notes, to caretakers of the elderly or the disabled. 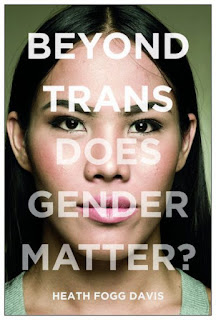 Heath remarks that, with the companies he works with, he first creates a gender audit using the same worksheets and questions that he includes in the book. Some of the issues covered are the corporate dress code policy, which is based on traditional gender models, and while Heath admits that, while some of these changes might appear radical, in the end, nobody gets disadvantaged and everybody benefits.

To someone who is inquiring into gender issues, Heath says for them to not assume what an individual’s gender identity is or what the gender pronoun to use on them is. He also recommends that people ask about the relevance of gender and how important it really is during the point of contact. Heath acknowledges that he is an optimist with regards to these issues, saying that he wants to demystify some of these through the book, which he hopes would be would open up a conversation on gender issues.

Purchase from Amazon: Beyond Trans: Does Gender Matter? by Heath Fogg Davis

Posted by alvinwriters at 8:18 PM