Kari Wagner-Peck on Learning from An Unusual Parenting Journey

Kari Wagner-Peck talks to Alexander “The Engineer” Lim, host of AuthorStory by alvinwriter.com about her book, Not Always Happy: An Unusual Parenting Journey.

“All communities have disability. It is a natural part of our human experience.” ~Kari Wagner-Peck

Kari started writing about her family in 2010, on blogs, the day she and her husband adopted her son, Thorin, which she points out that she couldn’t do so until then because Thorin was a ward of the state. Kari noted that she is a storyteller and seeks a response from people, and she wrote her blogs accordingly. Thorin had Down syndrome, and Kari and her husband quickly realized that Thorin’s main disability was what people thought of him, rather than his actual disability, itself. It was after six years of writing the blog that Kari realized that she was making an impact on her blogs’ readers, a third of whom aren’t parents and most of whom weren’t raising children with Down syndrome, and she eventually decided to write the book. She got an agent who helped her find a publisher for whom her family’s story resonated and from there she wrote her book, one of the reasons for writing which was her avocation that people include those whose neurological conditions are different from the norm. Writing the book was a learning curve for her, as her blog posts had an arc, and she found that she could go deeper into her stories, including her emotions and the emotions of people involved, as well as subsequent impact, in a way that she couldn’t within the short confines of her blog. She wanted to make a reader feel like Kari was telling her a story face-to-face, making her stories immediate and involving, which she was successful in doing, as her husband remarked that she had captured the person and the feelings involved in the stories she told.

While writing the stories were easy and fun for her, Kari admitted that writing an incident, when Thorin was two-and-a-half years old and she had had Thorin for only two months, and she went to Thorin’s pre-school to find him strapped to a chair, hysterical, while a teacher sat beside him and read a book calmly, claiming that she was doing speech therapy on Thorin, was one of the hardest things for her to write. Kari then noted that restraint and seclusion are things that people with disabilities know well, as the illegal use of restraint was inflicted on children with disabilities is commonplace.

Kari remarked that raising Thorin is like that of any other parent, in that he’s a typical boy and that there is nothing wrong with his essential intelligence. He likes learning, as he likes reading and math, and Kari remarks that the concern with Thorin is with how quickly he processes information. Thorin apparently doesn’t know what to focus on because so much information is given, and it takes time for Thorin to process and reply to a question, with Kari noting that it takes Thorin around thirty seconds to formulate a reply. Kari analogized that, for Thorin, it’s like having a whole bunch of stuff swirling around which can only go through a straw, and pointed out that Thorin’s problem isn’t intelligence but intelligibility. She differentiates that intelligence is the capacity to learn, understand and integrate information, while intelligibility is about being understood, which is a shared communication concern between the speaker and the listener, and that both need to be responsible for the proper communication to be conducted. 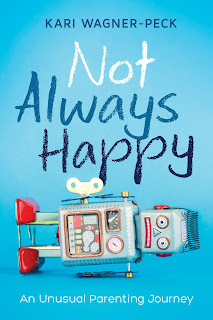 Purchase from Amazon: Not Always Happy: An Unusual Parenting Journey by Kari Wagner-Peck

Posted by alvinwriters at 7:07 PM