Gurutej Khalsa & Her Yoga for Couples Book, A Slice of the Beloved

Gurutej Khalsa talks to Alexander “The Engineer” Lim, host of AuthorStory by alvinwriter.com about her book, A Slice of the Beloved: Yoga for Couples.

“Nobody else can fill that void. It’s a huge void, and nobody can fill it for you.” ~Gurutej Khalsa 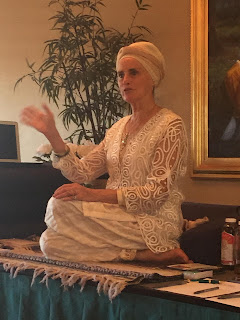 Gurutej’s journey into yoga began when, in college, she went over to the place of a man who was courting her friend when he invited the two young women over for dinner, and when the man mentioned that he was a vegetarian and did yoga, Gurutej was puzzled, as these weren’t commonplace in the late 1960s. She then did a speech assignment on yoga, and while doing research on the subject realized that she could do the poses that she had seen. Later on, she joined a yoga group in a nearby park, where she just got what yoga was all about, particularly how useful the body was to achieving well-being, as opposed to the teaching that the body was bad, and it was from there that she embarked on a decades-long journey into practicing and teaching yoga, studying under Yogi Bhajan and familiarizing herself with various types of yoga as well as investigating other types of meditation. Gurutej then went on to become a yoga teacher herself, applying the principles of yoga to everyday life, building yoga communities in Canada and building a community in the United States.

Gurutej mentioned that there are many different types of yoga, and the Asuna part of yoga focuses on the physical experience, while Kundalini yoga, which is the kind of yoga behind A Slice of the Beloved, focuses on chakras and the body’s systems, such as the nervous system. She also mentioned that breathing is a very important part of life, and that there are also many kinds of breathing, such as what she called the “Four Part Sipping Breath,” where one inhales in four parts and exhales in four parts.

A Slice of the Beloved: Yoga for Couples, is intended for anyone who is in a relationship or is ready to attract a relationship, and she points out that people say that they want a relationship but don’t define that which they long for and might not be able to meet the other person at that place of longing. Gurutej wrote the book out of her experience of counseling couples and hearing and seeing the same thing over and over again, she realized that she had a tool kit that others could make use of. The book also contains the lessons she has learned over the course of her life and all of the challenges she had experienced.

A Slice of the Beloved has four parts to it. The first is enabling oneself to connect with oneself, while the second is one connecting with others. The third is about building the soul of the relationship between the two, while the last part is about how the two in that partnership can serve the world, as one cannot serve when one is empty. Gurutej points out that, most of the time, people talk at each other rather than talking to each other, and it is to address this that Gurutej has included several exercises, meditation as well as talking, designed to enable the connection between the two people as well as to enable one to realize the subconscious driver of the other person, with the latter being the “beloved” in the book’s title.

Gurutej points out that the essence of a good relationship is when both are in the same place so that both talk to each other, rather than at each other. This enables people to live for each other, which Gurutej points out is not about losing oneself but about living for the soul of the relationship, and thus honoring the other person. She notes that, while there are certain relationships which are not workable, people, in general, are in a relationship not for ease but to grow, which requires people to bump up against each other. Gurutej points out that people who “fall out of love” actually “fall out of connection,” and that cheating actually begins well before the actual physical act of cheating itself, when one doesn’t show up in the relationship. She then mentioned that ignoring a relationship is like ignoring a plant – both will die when that happens, and that showing a partner that one cares is important. 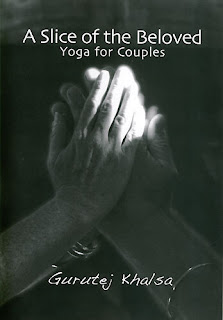 Gurutej notes that people are geared to connect and relate with each other, and that one should connect with oneself before connecting with others, rather than seeking others to fill any voids that might be within oneself. She also notes that we “huemans” have our own inner light.

Gurutej points out that the book is a tool that is intended to be used, and that keeping it on the shelf or just in memory without doing the exercises in it make it pointless. She points out that the principles and the work espoused in the book work, and that there is no other book that like it in terms of depth and practical effectiveness. To couples, Gurutej recommends that they sit on a couch across from each other, hold hands, look into each others’ eyes, and take turns saying, “I love you, I love myself,” to oneself and to the other.

Purchase from Amazon: A Slice of the Beloved: Yoga for Couples by Gurutej Khalsa

Posted by alvinwriters at 5:55 AM