Ryan White on Writing Jimmy Buffet: A Good Life All the Way

Ryan White talks to Alexander “The Engineer” Lim, host of AuthorStory by alvinwriter.com about his book, book, Jimmy Buffett: A Good Life All the Way.

“It’s fun, and it should be fun, and if it’s not fun, you’re doing a disservice to the subject.” ~Ryan White

Ryan spent sixteen years at The Oregonian, a newspaper, which was something he always wanted to do. He spent ten years as a sports writer and covered music for five and a half, and in 2013 he was contacted to co-write the book which eventually became Springsteen: Album by Album. Ryan remarks that getting on the project enabled him to stay cool when, a month after he signed up to co-write Springsteen, he was laid off along with a third of the staff at The Oregonian, and writing out the book gave him valuable experience which he was able to apply with Jimmy Buffett.

Ryan had been thinking of writing the book that became Jimmy Buffett even as he worked on Springsteen, and he got to working on it after finishing the latter book. He got off to a bit of a false start when he wrote the book initially from his perspective, and after his friend Peter Carlin told him that he wasn’t that interesting, Ryan stripped himself out of the book and focused on the stories and the themes around Jimmy Buffett. Ryan remarked that, so far, people seem to enjoy Jimmy Buffett, and he noted that writing the book was similar to what he used to do as a reporter, although the notes were more copious, as were the number of drafts and the file sizes.

Ryan remarked that he used to drive with his family, as a child, to Florida, and his friends in college listened to Jimmy Buffett, so he was somewhat familiar with the man and the milieu around which the song “Margaritaville” was built. He became attracted to the song after he was laid off from the newspaper while listening to it on the radio while driving his daughter to daycare, and noted the message of the song as well as that getting it on the radio was a challenge and that it is now the basis of a two billion dollar fortune, despite the song being his only Top Ten hit. 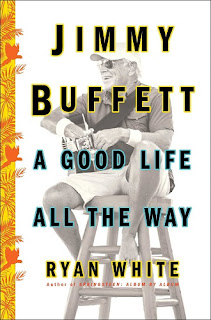 Ryan gave a thumbnail sketch of Jimmy’s life, as well as those of his parents who were, themselves, intentional businesspeople, and remarked that Jimmy gained his sense of fun and worldliness from the experiences he gained in his life. Ryan also commented that Mobile, Alabama, had a Mardi Gras tradition that was older even than that of New Orleans, and this was also one of Jimmy Buffett’s likely influences. Ryan also remarked on the various items and brands associated with “Margaritaville,” all of which reflect his sense of fun and adventure. Ryan also remarked that Jimmy understands who he is and what he can provide and that people genuinely like him, pointing out that, after two years of interviewing people about Jimmy Buffett, he hadn’t come across even one person who spoke ill about Jimmy. He also noted that Jimmy’s organization is full of people who have been there for decades, as they enjoy doing their jobs, which enables Jimmy to do his job.

The biggest surprise Ryan got was that, while the stage character of Jimmy Buffett isn’t that much different from the Jimmy Buffett as a person, Jimmy the person always was able to step outside of his character and focus on what needed to be done, and that is a key to his longevity. He also noted that Jimmy had made his peace with being associated with a single song, and advises people to stick with what they’re doing, figure out the questions and search for the answers.

Purchase from Amazon: Jimmy Buffett: A Good Life All the Way by Ryan White