Mark Zupan on The Inside Job: How Government Insiders Subvert the Public Interest

Mark Zupan talks to Alexander “The Engineer” Lim, host of AuthorStory by alvinwriter.com about his book, Inside Job: How Government Insiders Subvert the Public Interest.

“Government by the people doesn’t necessarily mean government for the people.” ~Mark Zupan

Mark is the son of immigrants who grew up in Rochester, New York and has embarked on a career in the academe, specializing in economics, and is presently the president of Alfred University in Alfred, New York. He began looking into politics from the point of view of an economist - supply and demand, in other words - in the 1980s, with another professor. Mark points out that the demand side of government interactions has been the focus of a lot of literature and blame, but looking at the supply side - the insiders in the government, such as a monarch or those in government - hasn’t been done, for the most part, and this is what Inside Job brings out.

Mark notes that autocracy was the norm throughout the world two centuries ago, and that democratic governments are now more commonplace, and the book shows that democracies are superior to autocracies when it comes to integrity in the public sector, pointing out the work of Transparency International, which shows that democracies, on the average, outperform autocracies where integrity in the public sector is concerned. Mark, also notes that there are around a dozen autocratic governments which rate high in this kind of integrity, as well as that, in some democratic governments, some people still have to pay bribes to get things done.

Mark points out that democracies have checks and balances within their systems that help maintain such integrity, and that there is a symbiosis between the supply side and the demand side. Mark gave an example of sugar lobbying, where the cost to the average American family is $50 a year due to import restrictions on sugar from other countries. The United States and its consumers thus lose anywhere from $500 million to $1 billion a year, and the reason this goes on is that the average family isn’t much concerned about losing $50 a year, and the sugar interests in the United States thus have more pull with the government.

Mark notes that, on the average, autocratic governments last nine times longer than democratic governments, yet produce poor results where prosperity and government cleanliness is concerned. Mark contrasts this with private enterprise, where good sales result from good products, and that power is the currency of governments. Some of the checks and balances that enable democratic governments to do better than autocracies are term limits and electoral competition, as well as a lower likelihood of “golden parachutes” and a greater confidence that anything that was created during the term of one government will be supported by the courts in being carried on into the term of another government.

Mark remarked, as an example of misuse of power on the supply side of politics, on the situation of the Janissaries in the Ottoman Empire, which started out as an attempt at a meritocracy, and which was egalitarian for one generation, which ended up seizing the power of the Empire to the point of being able to murder two sultans who were attempting to reform the Empire. Mark also gave the example of the sultans and the scribes losing power due to the printing press, which resulted in only 2% of the Ottoman Empire’s population being able to read at a time when literacy in Europe was 50%. 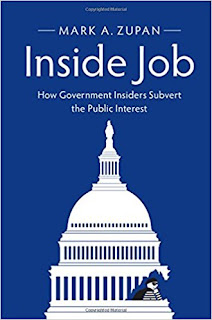 Mark notes that supply side power misuse is present in both China (the world’s largest autocracy) and in the United States (the world’s most economically developed democracy). Mark remarks that one in seven of the wealthiest men in China are political figures, which means that the party in power is unlikely to want to foster competition, as this would reduce the money they would get. Where the United States is concerned, Mark points out to the growth of public sector unionization, which has grown from 6% in the 1970s to 37% at present. This creates a large voting block which can exert electoral influence but also an imposition of power that can affect public trust and integrity. He points out the impact of such in the educational system, where the number of college-ready graduates have not improved despite increased spending, as well as unfunded pensions, which total close to $5 trillion, which makes this the second largest fiscal challenge of the United States.

Mark notes that the average person, in a democracy, has the power to affect the interplay between supply and demand sides of government, and that people have to be involved with the checks and balances to ensure that things don’t get out of hand.

Purchase from Amazon: Inside Job: How Government Insiders Subvert the Public Interest by Mark Zupan.

Posted by alvinwriters at 9:09 PM