Carlyn Montes de Oca talks to Alexander “The Engineer” Lim, host of AuthorStory by alvinwriter.com about her book, Dog as My Doctor, Cat as My Nurse: An Animal Lover's Guide to a Healthy, Happy and Extraordinary Life.

“All animals, really, can help us.” ~Carlyn Montes de Oca

Carlyn had grown up amongst dogs as a child, and had always wanted to be an author since then. She might have worked in the film industry for a time, and even then she felt pulled to do something that was more meaningful to her. She eventually went into Chinese medicine and holistic healing, and it was while she was developing herself in these that she heard stories from people about how their animals helped them. Carlyn realized then that there was a connection between health and how people related with animals, something which she, herself, had experienced after going through a divorce, as her cats and dogs helped her out during that time. This connection, Carlyn opines, is important for humans, as people die from chronic illnesses nowadays, with one in four people dying of heart disease, which is preventable through lifestyle choices, and a relationship with an animal can enable that kind of a healthy lifestyle.

Carlyn remarks that Dog as My Doctor, Cat as My Nurse is all about the beneficial effects that dogs and cats have on human beings, which includes decrease in stress and blood pressure, boost to the immune system, emotional wellness as well as a wide range of other positive health benefits. Carlyn mentioned that she has 103 references in her book which scientifically back up the benefits health have on people. Although the book has been somewhat long in coming, Carlyn remarked that the kicker was when, while she was walking with her dogs, the words “dog as my doctor” hit her, which she thought would be a good title for her book. After she got home, the cat leaped on her back while she was relaxing, and “cat as my nurse” then came to her as a good title.

Carlyn became interested in cats when she lived on her own, in an apartment that was too small for dogs, which was why she got cats, and it was from them that she realized that all animals have the capacity to love and interact with human beings, pointing out that pot bellied pigs and horses are also pets. She opines that cats have become popular because the places people live in don’t allow for dogs, and that cats don’t need that much companionship compared to dogs and might be easier to take care of. She notes that a pet can be any animal, that the benefits are particularly pronounced when the person had a deep relationship with the animal involved, and that this is most likely due to pets being a manifestation of unconditional love.

The book has a lot of stories in it, and one of the cat-related stories Carlyn mentioned is a couple where the husband has Parkinson’s disease. The wife liked taking walks with him, and she was saddened when they could no longer do so. During one such solo walk, she discovered that one of their two rescue cats was walking with her, and the cat went on walks with her after that, which helped her out greatly. The two cats they had also seemed to sense when the husband wanted to be alone and when he wanted to interact, and when they sensed the latter they began playing and essentially entertaining him. 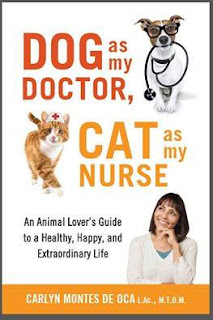 One of the dog-related stories Carlyn mentioned was that of a widower who had lost his wife after a long struggle with disease. The man intended to kill himself, as he was depressed, but before he could do so he had a dream where he saw their dog waiting for him outside their house, and when he woke up he realized that, if he had killed himself, the dog would most likely have waited for him until the day she died. The man then packed up and took a long walk to California, taking the dog with him, and after that walk Carlyn said that he was a changed man, particularly since he credited his dog with helping him save his life along the way.

Carlyn remarked that she had a “six pack” of dogs and cats, but at present only two old dogs remain from that pack, as the other four had passed away during the five years she took to write the book.

To those who would have a cat or a dog as a pet, Carlyn recommends that they go to a local shelter or rescue and tell the personnel there their concerns, and then go with their instincts when it came to adopting an animal, as it is often the animal who chooses the human.

Purchase from Amazon: Dog as My Doctor, Cat as My Nurse: An Animal Lover's Guide to a Healthy, Happy and Extraordinary Life by Carlyn Montes de Oca

Posted by alvinwriters at 5:57 PM