Bill Schutt on the Nature of Cannibalism

Bill Schutt talks to Alexander “The Engineer” Lim, host of AuthorStory by alvinwriter.com about his book, Cannibalism: A Perfectly Natural History. 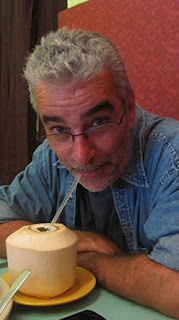 Bill grew up in New York and had always been interested in “animals, movies and the macabre,” and admits that he had every kind of pet imaginable while he was a child. He became a biologist, researching several different species of animals and, in particular, studied the three species of vampire bats. He got his post doctorate degree from the American Museum of Natural History and has been a college professor for some time. He admits that when it comes to his subjects, “the stranger, the better.”

Bill noted that Cannibalism is a follow-up to his earlier book, Dark Banquet: Blood and the Curious Lives of Blood Feeding Creatures, and just as with Dark Banquet, Cannibalism seeks to demystify and de-sensationalize a topic that a lot of people find at least questionable, covering the totality of animal cannibalism as well as taking an objective viewpoint of human cannibalism. He was surprised to find that cannibalism was widespread and served functions other than purely survival in the animal world, and that cannibalism in human cultures likewise had reasons other than survival.

Bill wrote the book, Cannibalism to be accessible to the average person, injecting humor and making it as entertaining as possible, as most studies on cannibalism are either academic or sensationalized, and notes that the serious study of cannibalism only began in the 1980s.

In the natural world, cannibalism is found in every major animal group, which was different from the scientific “party line” and is more widespread amongst invertebrates than amongst vertebrates. Bill does admit that cannibalism reduces one’s own gene pool and can result in the spread of pathogens that have adapted to take advantage of cannibalism, but notes that there are some advantages that outweigh these concerns. Codfish, for example, eat their own eggs, as there are millions of these, as nourishment, and some fish eggs will actually never hatch (trophic eggs), as they are intended to become food for the newly-hatched hatchlings in the group they were laid in, which would give them a huge survival advantage. Sand tiger sharks produce one young in each of their ovaries which consume the eggs in that ovary as well as their smaller siblings, so that, when they come out, they are already well-nourished, practiced killers - a huge advantage for a predatory species. The females of some species of amphibians, caecilians, have skin that are consumed by their larvae, which thus gives nourishment to their young so they could have a better chance at survival, and male lions, when they take over a pride, kill and eat the cubs left over from the previous male so they could mate with the females, who will come into heat faster, and thus pass on his own genes. 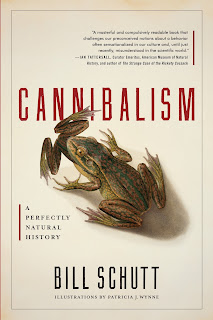 Bill noted that, in Europe, the Greeks were the first to make cannibalism a taboo, but that several human cultures around the world have no such taboos. Despite cannibalism being a taboo in Europe, due to Greek thought, cannibalism was commonplace there, as human body parts were consumed for medicinal reasons. Ritual cannibalism, of which funeral cannibalism is a part of, is more widespread, and Bill notes that, since culture is king, people learn through tradition to practice cannibalism, as well as that, when Westerners first encountered cultures that practiced ritual cannibalism, the members of those cultures were just as horrified to learn that Westerners buried their dead as the members of those cultures “simply” ate their dead. Bill also remarked that a researcher, Dr. Simon Underdown, believes that cannibalism may have helped reduce Neanderthal population due to a disease similar to the Creutzfeldt-Jakob Disease, which, in humans, could be caused by cannibalism, specifically the consumption of human brain material.

Bill has also written fiction, having brought out his first novel, Hell’s Gate, in June, 2016, and a second one, The Himalayan Codex, due out in June, 2017, and both feature his love of history and zoology. He notes that people should not just swallow the sensational aspects of cannibalism, noting, as an example, that polar bears have been cannibalizing their own cubs for thousands of years, rather than doing so only because climate change is impacting their species.

Posted by alvinwriters at 2:57 AM