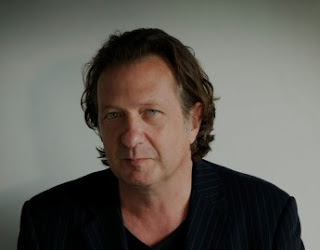 Rory likes to write dark fiction generally in the category of crime, but he has been writing short stories since he was child, and he having read the works of such authors as Agatha Christie and Georges Simenon. He was a crime reporter for a few years and thus got a bit of an insight into police work, and he released his first novel in 1992; Dark Horse is actually his seventh book (the first five were released under his real name), and the second in a planned ongoing series.

Rory, along with several others, founded Concord Free Press, which is a publishing house that has a unique approach to book distribution. It is based on the concept of a gift economy, and authors publish their original works and give these away for free through the press, while still retaining the rights to their stories. The paperbacks are delivered free to the book’s buyer, even free of shipping charges, and in exchange, the buyer of the book is encouraged to donate to a worthy charity or do some act of active generosity. The Press has been very successful, as Rory remarks that millions of dollars have been raised for various charities, such as the rebuilding from the devastation of Hurricane Sandy, with one of the most successful ones written by Gregory Maguire, who wrote the novel Wicked, on which the play was based. His book proved to be so popular that the press needed to allocate particular times to handle the volume of requests.

The series of which Dark Horse is the second book for revolves around the work of the lead character Eddy Harkness, and Rory intends that all of titles in that book are those of fictional illegal drugs. His characters are all quirky in their own particular ways and also have their own particular mannerisms, and Rory just loves putting them together in a scene to let them just go. He also notes that drafts enable him to figure out just how much the characters will show up, and that writing enables him, as with all writers, to explore the various aspects of human character and relationships, both bad and good.

Rory notes that the drugs featured in his books are fictional ones, and also notes that drugs are part and parcel of American life unfortunately, with a lot of Americans under the age of 14 already abusing one form or another. Corruption, Rory remarks, is found all over the world, and while his experience as a crime reporter gave him an insight into how police operate, he admits he only wants to get the details plausible, rather than get bogged down in the details and minutiae of policing. He admits that the cops in his books would not be found in the real world as his creative license makes them too different and that Eddy Harkness, if he were real, would likely get fired for his actions in the book. 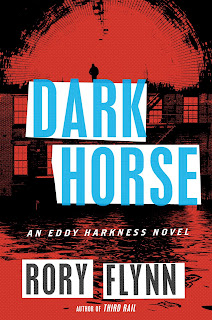 For Rory, writing a book is second nature, with each one being an evolution from an idea to exploration and to the final product, and while he realizes that the job of the writer is to engage others. He also tells young writers that, just because a topic is interesting to them, it may not be interesting to others and challenges them to constantly ask the question, "Who would care?" where the topic is concerned. Where Rory is concerned, the world is "endlessly fascinating," so if he gets interested in a topic, he might get a story from it, although he does want to make sure that the story hasn’t been written before and wants to make sure that others would be interested in it.

Rory Flynn’s website for his book, Dark Horse, is mrroryflynn.com.

Posted by alvinwriters at 10:14 PM