D.J. Bodden talks to Alexander “The Engineer” Lim, host of AuthorStory by alvinwriter.com about his book, Black Fall, Volume One of the Black Year Vampire Saga. 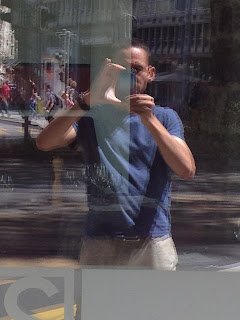 D.J. had a very varied childhood, being born in the Cayman Islands and then spending his childhood in Monte Carlo and being educated in the French educational system. It was when he was seventeen that he realized that he didn’t particularly take well to the thought of the career track that he foresaw being laid out for him with that system, as he was a storyteller at heart. Being a Marine veteran, D.J. remarked that military veterans had a lot of stories to tell, even those they didn’t tell anyone else, and was attracted to the stories behind the boxes full of “neat things” that they had. He spent thirteen years in the military, which he was able to do as he held both British and American passports, and it was while he was in the naval academy that one of his professors suggested that he major in literature.

It was towards the end of his final deployment in Afghanistan that he wrote his first book, one which, he admits, was “horrible.” He then worked with editor Michael Garrett, Stephen King’s first editor, who gave him a great deal of constructive advice. D.J. then spent the next two years after that researching and working on his craft as a writer, as well as becoming an editor, helping other writers. It was while he was doing that when he met with writer Joe Cleveland, who came to him with a concept which D.J. became invested in, to the point that he began altering the story, with Joe Cleveland’s assent, and made it more his own. Joe ultimately didn’t like the direction the story was taking, so when Joe offered to essentially sell the rights to D.J. for a particular sum, D.J. took the offer; and it was thus that Black Fall came into being.

D.J. was familiar with the classic stories of vampires, such as Bram Stoker’s Dracula and The Vampire Lestat, so he found the kind of vampires in such stories as Twilight somewhat funny. For him, vampires are intellectual creatures that are outliers of human society, and through the book, he explored what it would be like to have such creatures exist in the practical, everyday world we all live in. He also.notes that various literary movements become popular because people, at the time these movements are popular, wrestle with questions about certain sectors of society which are reflected in these movements, and it is in this context that D.J. writes about vampires.

D.J. took six weeks, after buying Joe out, revising it so that it would be the start of a book series, which is designed to follow the lead character, Jonas Black, from adolescence to his sixties, through literally world-changing events that also change him. The characters in the final version of the book aren’t as originally conceptualized by Joe Cleveland, in conformance with the change in the concept of the story. He filled out the characters’ back stories in particular, such as the one for Doris, to make them more three-dimensional than they had originally been, noting that he spent “thousands of hours” doing research and re-imagining the characters. He hated the kind of style that focused on setting, which he experienced while learning French literature, and so focuses on a more visual style of description, keeping the descriptions of setting at a minimum. 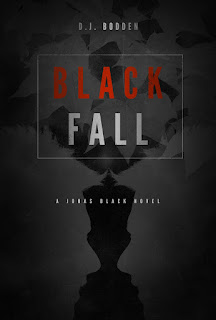 D.J. believes that a reader should never be bored, and points out that people buy the books in the series one day after the other; and it is for the reason of “trying not to get people bored” that he cuts out any scene that he gets bored with. D.J. also remarks that he learned something new every single day when he was writing the book, admitting that he is obsessed about the characters and the story when he is working on them, and that some of the most important story points came while he was just walking around.

D.J. advises that people approach everything, particularly things which they have assumed to be true all their lives, as if they were approaching it for the first time, without any preconceived notions, and that, once one has figured out what one needs to do, then one should do it, as one might never get the chance again.

You can find Black Fall on D.J.’s website, djboddenauthor.com/books.

Purchase on Amazon: Black Fall by D.J. Bodden
Posted by alvinwriters at 1:48 AM