Reese & Fleisher on Reinventing the Senior Woman Beyond Mid-Life 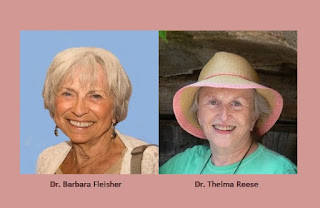 Thelma and Barbara have been friends and colleagues for nearly five decades now, and both are “active octogenarian” grandmothers. Both come from strong academic backgrounds, both being retired professors. Thelma is involved with developing young playwrights and has worked with troubled youths, while Barbara has traveled all over the world. Their being doctors of education came in particularly handy when doing the research and digging into the subjects.

The inspiration for the book came several years back, when they remarked that they were still healthy and involved and saw that some of the people around them were successful and just complaining. Both authors looked at their own mothers and realized that these weren’t good role models for the present generation of senior women, as their expectations were different, particularly since they didn’t expect to live as long or be as involved in the world.

Where the book is concerned, both authors were determined to not make it an academic textbook but more conversational in presentation, for the average person. Barbara noted that she and Thelma also had the advantage in that they were at the ages that the book was concerned with, and could thus speak from their own personal experience. They interviewed over 200 women from different backgrounds, ethnicities and income levels, aged sixty to a hundred years old, and the book is set up according to the concerns these women faced, such as downsizing to smaller quarters, separation and loss, family relationships and health issues. Thelma remarks that there are role models for seniors “all around us,” noting that advertising is directed towards them nowadays.

Some of the factors contributing to the growing importance of seniors nowadays are their numbers, as life spans are now longer due to proper hygiene and health maintenance, resulting in their being healthier and more mobile compared to the generations before them, as well as their becoming a substantial demographic group. Thelma remarks that a change in perception about how society sees seniors needs to come about, particularly since lots of seniors can still contribute meaningfully to society at large. Thelma adds that seniors still face the old attitudes regarding seniors, such as being patronized. Barbara then noted that seniors have an obligation to be involved in things and to have an open mind, with those who just sit back and expect homage to be automatically given to them being the ones who should be patronized. Thelma then remarked on the “senior bubble,” wherein seniors cut off any opportunities to engage with others out of fear or insecurity.

Barbara remarks that, for even the less mobile seniors, information is now freely accessible to them. Thelma remarked that, when they started their blogs at elderchicks.com, there weren’t that many seniors who were able to enter the conversation, given that a lot of them weren’t computer literate. Barbara noted, however, that senior baby boomers are computer literate, which means that more and more senior citizens will be entering the digital conversation as the years go by.

According to Thelma, resilience, reflection, living for the moment and determination were some of the most impressive things that came out of their interviews, which are traits that are developed over time. Barbara also noted that putting things into perspective is also a result of years of experience, so that things that once stressed one out when one was young aren’t as stressful in the now. Barbara mentioned that the successful senior women regard this part of their lives as a fork in the road and try to do things now that they hadn’t been able to do before, and if these activities don’t work out then these can be dropped without guilt.

Barbara remarked that the women who mourned the loss of their youth and tried to regain it through superficial means weren’t particularly successful. Thelma noted that this is a time of one’s life that one hasn’t lived before and that there are opportunities now that haven’t been available before, including the time to journey within oneself. Barbara noted that attitude, resilience, acceptance and being open-minded are vital factors to success at any age, and Thelma notes that a young woman who has such qualities will be successful in her senior years.

Barbara admits that writing the book has changed her life through meeting all the women that she got in touch with, while Thelma admitted that she enjoyed the opportunity to learn about other people and to be inspired by them. Both are now working on a similar book with men at the subjects.

Dr. Barbara M. Fleisher, EdD & Dr. Thelma Reese, EdD website for her book, Reinventing The Years Beyond Mid-Life: Why It Is Possible To Get Better With Age, is www.elderchicks.com.

Purchase on Amazon.com: Reinventing The Years Beyond Mid-Life: Why It Is Possible To Get Better With Age

Posted by alvinwriters at 6:51 PM