D.D. Marx on Beyond Believing - A Novel about Love That Awakens the Heart

D.D. Marx talks to Alexander “The Engineer” Lim, host of AuthorStory by alvinwriter.com about her book, Beyond Believing: An Inspiring Story to Awaken the Heart.

“The limit is only your imagination.” ~D.D. Marx 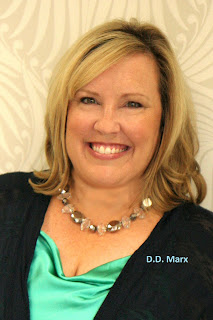 D.D. Marx has always been a strong communicator, and her creative juices began flowing after participating in the Second City program. Although she had no desire as a child to become an author, this desire came into being after she lost a close friend of hers in a car accident after college, and her book sprang from this event. Her book, Beyond Believing: An Inspiring Story to Awaken the Heart, is a mix of actual things that happened to her as well as fictional events, and she wanted to present these in such a way that the reader wouldn’t be able to tell the difference between the two.

D.D. Marx combined her first name and her friend’s first and middle names to create her pen name, and she names Paulo Coelho, Jen Lancaster and Emily Giffin as some of her favorite influences. Beyond Believing is actually the first book of a trilogy she intends to write, with the trilogy focusing on the characters of Olivia and Finn and their developing relationship. Where characters are concerned, only Finn is the totally fictional character, while Olivia is based on D.D. herself and Dan is based on her friend who died in a car accident, and Finn was the character for whom Olivia needed to do the most amount of research on, given that he was Scottish and that D.D. had never been to Scotland, even though she did have a Scottish neighbor with whom she is good friends with.

D.D. didn’t want to impose a particular spiritual belief on the reader, and despite some potential spiritual elements in the book, she declines to have the book referred to as a paranormal romance. She wrote this book after she had been fired from her first job ever, and after that event really delved into such questions as what her purpose was and what she was doing, what made her fulfilled, and what she was passionate about. One of these aspects was friendship, and writing the book enabled her to step “out of the box” she had been living in as well as fulfilled her in ways she hadn’t realized, including becoming less stressed in her present job. She chose the title as a way to give multiple meanings to the story. 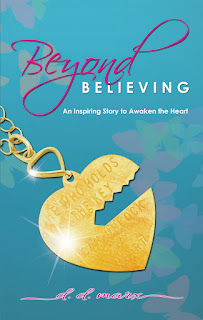 To those who are interested in becoming a writer, D.D. recommends first getting out of one’s own way and to just write the book out, tell the story, and then edit it later, after which one could show the story to those one trusts and work with an editor to make sure it works. To those who seek to publish their first book, D.D. recommends that a would-be author should not be afraid to ask questions, to do their homework to make sure they’re working with the right partner for them - homework which includes getting references from their other authors, getting samples, and ensuring that a contract is signed, particularly given the many publishers out in the market nowadays.

In the future, once she’s done with the trilogy, D.D. hopes to write stories based on the perspective of the character of Dan.

D.D. Marx’s website for her book, Beyond Believing, is ddmarx.com.

Purchase on Amazon: Beyond Believing: An Inspiring Story to Awaken the Heart

Posted by alvinwriters at 5:14 AM