Dr. Susan Allison on How to Visit Heaven through Shamanic Journeying

Dr. Susan Allison talks to Alexander “The Engineer” Lim, host of AuthorStory by alvinwriter.com about her book, You Don't Have to Die to Go to Heaven: How to Find Guidance and Healing in the Spirit Realms.

“As average people, we could tap into this incredible shamanic world.” ~Dr. Susan Allison

Susan had always been seeing spiritual beings since childhood, when she grew up in an orchard, where she communicated with angels, elements and animals. Her mother viewed such stories as those of childhood fantasies that had to be humored, and even as a child, Susan remarked that she had always had intense energy in her hands which she could use to heal animals and her parents. While Susan maintained her connection to the Spiritual Realm throughout her life, such as using that energy to heal through Reiki practices and in her work as a transpersonal psychologist, she expanded her exploration into shamanic practices after a workshop in 1993, which was led by someone who was trained by Michael Harner, founder of the Foundation for Shamanic Studies and author of The Way of the Shaman: A Guide to Power and Healing and Cave and Cosmos: Shamanic Encounters with Another Reality. Since then, she has been able to easily access and travel into the shamanic world.

Susan points out that the title “shaman” is bestowed by one’s tribe, so those who haven’t been granted such a title call themselves shamanic practitioners. As a shamanic practitioner, Susan communicates closely with Nature, which is very important in shamanic practice. Susan also notes that, prior to journeying into the shamanic world, one must set one’s intention of what one wishes to accomplish or experience.

Although Susan admits that the book had been brewing inside her all her life, the catalyst was her husband’s six-year bout with laryngeal cancer, during which time she became even more involved in traveling to the shamanic world, to alternate dimensions of reality which, according to her, have been mapped by shamans for the past sixty thousand years, to get information on how to help and heal her husband’s illness. Her husband eventually passed away, but the experience, as well as her subsequent journeys into the shamanic world, where she met her husband in spirit, served to prod her into writing the book where she describes the different spirit worlds revealed in a relaxed and deep state of consciousness induced by drumming.

The Middle World, according to Susan, is the nexus from where one goes to the Lower or the Upper World, and is called, in Hawaiian shamanism, the “Sacred Garden.” It’s very much like a dream state whose appearance differs from person to person. A traveler to the Middle World can invite beings that love him or her while here, including spirit allies and teachers, as well as beings who show up and surprise the traveler, all of whom serve to enrich one’s present, existing life on Earth. The Middle World is also a place of refuge and renewal, where our spirits go to after our bodies die.

The Lower World is accessed from some kind of opening from the Middle World, such as a cave or a tree hollow, and is a place of ancient, pristine, primeval nature, where wise animal spirits abound which can guide and help the traveler and which communicate mentally. Susan remarks that the Lower World is a place where one can release personality and character traits that don’t serve one any longer, such as being judgmental, resentful or angry. It is also a place where one can also assume an animal form and then experience the spiritual power associated with that animal.

The Upper World is initially accessed with the aid of spirit animal guides from the Lower World, and eventually, travel up to this world is done according to one’s own reality; Susan, for example, journeys by going to the top of the tree in her Middle World and then asking for a being to carry her up to the Upper World, while another of her colleagues uses an elevator. A traveler has to pass through a sort of veil-like mist or membrane, according to Susan, and within the Upper World is a library where one can access one’s past lives and invite such beings as one’s family members who have already passed on and divine teachers.

Susan notes that each person’s world is different, and it is because of these that she cautions that the worlds that are described in books detailing travels to the spiritual realm may not be the ones that a traveler will experience. Susan also remarks that she has encountered beings from other traditions, such as Rama from Indian belief, and that even people who don’t believe can so travel to the shamanic world, and beings that love the traveler will show up and share things that the traveler needs. She notes that time isn’t linear in the Shamanic World, so the spirits of the beings can be everywhere at the same time, and that researching on the spirits after meeting with them can produce surprising results, such as with the research she did on one of her ancestors who communicated with her. 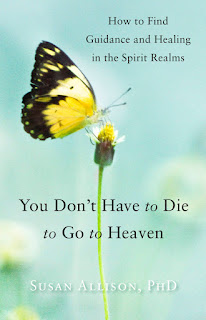 Susan would suggest to people to suspend their disbelief, and remarks that those who don’t believe in the shamanic world often have a scientific outlook. To them, she suggests studying quantum physics, which tells that everything is energy, and to think in terms of energy. Susan notes that things will happen in the Spirit Realm that one could not make up, such as her meeting Rama or Lao Tzu, whom she didn’t even knew about until she met them. Susan emphasizes that she has written a workbook for readers of her book and hopes that it will dispel the fear of death that anyone has, and help support the belief that one can visit their departed loved ones in the Spirit World at anytime he or she wishes to do so.

Dr. Susan Allison’s website for her book, You Don't Have to Die to Go to Heaven, is drsusanallison.com.

Purchase on Amazon: You Don't Have to Die to Go to Heaven: How to Find Guidance and Healing in the Spirit Realms

Posted by alvinwriters at 5:40 AM