In this interview, Christine Brown-Quinn talks to Alexander “The Engineer” Lim, host of AuthorStory by alvinwriter.com, about her book, Unlock Your Career Success: Knowing the Unwritten Rules Changes Everything. 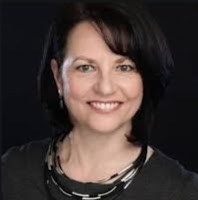 Christine Brown-Quinn has spent thirty years in the corporate world and has become a Managing Director in International Finance, moving from the United States to London to pursue her career, as part of a wave of people who were recruited to London to strengthen the financial industry there. It was in 2010 when the bank she was working for launched a Women’s Network, which Christine had no idea what was about, as she was used, by then, to being “the only woman in the room.” When Christine asked why she was being asked to give a talk at that summit, she was told that she had a successful career as well as a family, and women would be interested to know how she did it. It was from this that she realized that the skills she did at work were ones which she transferred to her home, and vice versa, remarking that people actually become better parents and partners because of the skills they can pick up at work. Where things brought from personal life are concerned, Christine remarks that it is the values that are taught at home are the things which one brings to work, and gives an example of when her children called her out on her not doing something which she said she did.

It was during the talk, however, that Christine realized that her work was now to coach other women about how to have both a career and a family life, given the framework of both aspects of one’s life supporting each other. It was during the summer after that talk, which took place during the financial crisis of 2010, that she left the banking industry and set up her own career consultancy business, then turned that into her first book. Unlock Your Career Success is her second book, and the seed of this was planted when several of her clients mentioned that she needed to write it. “I woke up in March 2019, and the whole book was in my head,” Christine confesses, adding that what the book’s subject matter covered was essentially what she had been talking about for the past ten years.

Christine admitted that, when she left the university, her idea of career progression was all about “doing a great job;” that said, she remarked that that is only what starts off one’s career, and that it is up to the person themselves to ensure that their careers progress, as a company’s HR or a person’s manager is not responsible for that.

Christine offers the following question for women who have both family and career: “As a parent, how am I at my best?” She notes that everyone is individual, and that a “one size fits all” approach doesn’t work, so people need to think about the ways by which they will be happy, remarking that her being at home with the children all the time isn’t something that she could do well. Having a career was thus very necessary for Christine, as work stimulated her and fulfilled her being a mother. 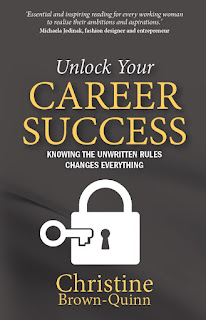 Where work is concerned, Christine notes that the issue is that of having a mismatch in culture, noting that, when women enter the workplace, they want to feel good about the value they’re bringing as well as feel good about their organizations, working in a way that “feels more natural” to them. She notes that a lot of women look for leadership role models in the corporate world, leaders who are willing to collaborate and bring the best out in others, and that this is more of the issue than anything else. Christine also remarks that people want their work to be meaningful in that, if one has children, one desires more that the time spent away from family counts.

Christine’s most targeted audience is women in corporate environments, as she helps women navigate the issues and leadership styles in such an environment – something she has had a lot of experience with, given her corporate career. She gave the case study of one of her clients, Candida, who worked for a technology company who had worked very hard but whose career stalled out. Christine was able to coach Candida into getting the kind of position she liked, by focusing on a digital start-up department that she was interested in getting into and by using her network of contacts to send the head of the department some suggestions. These suggestions interested the department head and, thanks to Christine’s coaching, Candida asked open-ended questions which gave her more insight into concerns within the department that she could help out with. As a result, Candida is now in a position, in that department, that fulfills her. 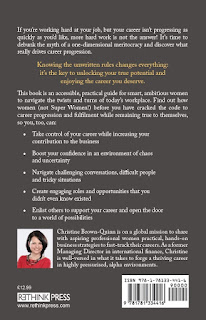 Christine notes that the rules in the book are intended to establish career-enhancing mindset and behaviors which are needed to achieve career progression, within the context of what makes one happy. She notes that one has to plan one’s career and nourish one’s network are critical to helping one’s career progress; and the latter is particularly important when getting a broader understanding of the challenges facing the company, as one can then provide suggestions which can address said concerns. The unwritten rules, Christine also remarks, resonates more with women than with men, as the way women navigate the world is different from the way men do so. That said, men can also pick something up from knowing these rules as, while they know those rules, it articulates those rules and gives an awareness of the way women think, as the viewpoint the rules show is an alternative one which they can use to help others.

“The best way to sell is to understand the need of the client, and then address it,” Christine notes. She also remarks that, in today’s environment, the challenges of technology and the pace of change is very fast. That said, the chaos that exists in today’s environment also creates opportunities, Christine believes, and this gives people an opportunity to align the needs of the organization with one’s own values and the value that one can add to the organization. “That’s what job security looks like, now and in the future,” she concludes.

Purchase from Amazon:
Unlock Your Career Success: Knowing the Unwritten Rules Changes Everything by Christine Brown-Quinn

Posted by alvinwriters at 2:46 AM