John E. Dowling on Vision: How It Works and What Can Go Wrong | Blindness Prevention

In this interview, John E. Dowling talks to Alexander “The Engineer” Lim, host of AuthorStory by alvinwriter.com, about his book, co-authored with Joseph L. Dowling, Jr., Vision: How It Works and What Can Go Wrong.


“Do everything you can to protect your eyes.” ~John E. Dowling 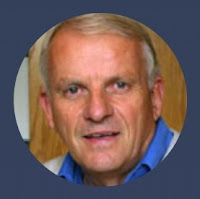 John has been studying the retina of the eye for five decades now, while his brother, Joseph, is an opthalmologist. John has been interested in understanding the retina, which includes knowing the functions of all the various cells related to vision. He and his brother attended a seminar called “An Initiative in Vision Science,” which was all about understanding the causes and better treating eye diseases. It was over the course over the next decade, when he conducted workshops with clinicians, he realized that clinicians are not up-to-date on the latest scientific findings and that scientists, like John himself, are not aware of the major eye disease and what needs to be done about these. John then joined forces with his brother, Joseph, to create a book which is understandable by laypeople and which can bridge the gap between clinicians and scientists.

Vision, John testifies, is very important to human beings, so much so that going blind is viewed as being more serious than having cancer, with blind people saying that they are willing to give up years of their life to regain their vision. The visual system takes up half of the cerebral cortex in humans, making it the most important sense for humans. The human color system is the most sophisticated one around, with only other primates being rivals for such sophistication. For sensory visual cells, humans have rods, which are used in low-light conditions, and cones, which are used in daylight conditions and can see three different kinds of hues: red, green and blue. (In contrast, dogs, cats and cows have only green and blue photoreceptors, which means they can only see in these two colors.) In addition, human retinas have a fovea, which creates an area of higher resolution which enables humans to do such things as read and take notice of details.

John notes that the retina is actually a piece of the brain that has been pushed out into the eye during the development of the human fetus, and its main function is to process the images that fall upon the photoreceptors that are found in it. Light is captured by the photoreceptor cells in the retina, which use a modified form of Vitamin A to do the work when combined with some proteins. The light hitting the visual pigments in the photoreceptors changes their state, which creates an electrical change in the photoreceptors, which then passes this signal to the secondary cells, the bipolar cells and horizontal cells, which helps integrate the signals captured by the many photoreceptors in the retina as well as start analyzing color. These signals are then passed to the cells on the inner part of the retina, the ganglion cells and their related axons, which carry the output of the retina to the brain, and the amacrine cells, which detect any movement images which fall on the retina. The resultant signals carry information on distance, color and movement to a waystation to the brain called the lateral geniculate nucleus before then heading on to the visual cortex. The latter further analyzes the image before sending these to visual areas 1 and 2 (V1 and V2), which are specialized to process such aspects as movement, form and color. From here, the information heads into two visual pathways, the dorsal one being concerned with the placement of objects in space, while the ventral one performs analyses on forms, such as faces. 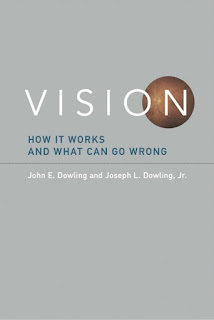 Where optical illusions are concerned, John notes that visual perception is reconstructive and creative, where what is seen is interpreted based on experience – what one is expecting to see – as well as what actually comes in, which is the basis of optical illusions. This means that people need to learn how to see, which means that youngsters up to the age of eight or ten who don’t learn how to use and process their vision properly will subsequently have difficulty interpreting what they see, even if the condition that causes such improper vision is removed. John then gives the example of children with congenital cataracts, which give cloudy vision, who become blind to form in those eyes where the cataracts were, if the cataracts aren’t dealt with quickly enough. He also gives the example of amblyopia, where a child has one good eye and an unresponsive, crossed eye where, if the condition isn’t dealt with during childhood, the child becomes an adult whose brain ignores any images coming from the unresponsive eye.

Where glasses are concerned, John notes that everyone eventually needs glasses, as the lenses stiffen up, requiring people to use reading glasses – usually starting in their forties – to read things up close.

John remarks that, worldwide, cataracts are the leading cause of blindness. This isn’t as critical in the United States, as cataract operations in the United States are outpatient procedures which last only twenty minutes each and artificial lenses made of plastic can be used to replace cataract-laden lenses. Age-related macular degeneration, where the fovea degenerates, is the leading cause of blindness in the United States, and comes in two forms – the dry form, where lesions appear in and around the fovea; and the more severe, wet form, where blood vessels grow into the fovea and leak into the latter. John notes that, at present, there is no way to treat the dry form, while there are drugs available which can slow down the wet form. 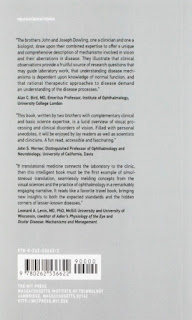 Glaucoma is, according to John, another common condition, which is caused by high liquid pressure in the eye, which degenerates the axons that carry information from the eye to the brain. (Drugs can be used to reduce this pressure.) Retinopathy, or the damage to the retina, is another condition which can be brought about by diabetes. This is caused by the ingrowth of blood vessels in the retina.

John admits that, at present, nobody knows the true causes of such conditions as cataracts, nearsightedness or farsightedness, amblyopia (lazy eye) and glaucoma. He notes that present methodologies correct conditions, and that recent research has enabled such conditions as retinitis pigmentosa – which results in the breakdown and loss of retinal cells, a condition which can start in one’s twenties and which can result in total blindness by one’s sixties – to be treated with gene therapy. He also notes that most conditions which cause blindness occur in the eye, rather than in the brain itself.

John recommends getting one’s vision tested at least once a year to catch any conditions that might come up where vision is concerned. He also recommends not straining one’s eyes and maintaining good nutrition to keep one’s eyes healthy.

Purchase from Amazon: Vision: How It Works and What Can Go Wrong by John E. Dowling

Posted by alvinwriters at 5:38 AM