In this interview, Jenny Hammer talks to Alexander “The Engineer” Lim, host of AuthorStory by alvinwriter.com, about her book, Albert Drosoph’s Field Guide to Punctuation: For the Observant, the Dismissive, the Curious, the Confused.

Albert Drosoph’s Field Guide to Punctuation was actually inspired by a children’s book which Jenny wrote but, as of this interview, has not yet been published. Albert Drosoph is a character in that book who raises punctuation marks in a bavarium and whom the protagonist, Arden Everest, encountered. The Field Guide itself springs from Jenny’s years of teaching English and from her seeing English grammar guides which were difficult for the ordinary person to understand. The Field Guide is thus an attempt to introduce punctuation to the average person in a way that is helpful and understandable.

The layout of the book is similar to that of a nature field guide, with fictional descriptions of scientific taxonomy (species, family, etc.) followed by sections which describe the field, range and other characteristics of the punctuation mark being described. That said, the format is intended to allow the reader to understand how to best use the punctuation mark in question by correlating such things as where it should be used to where it would, were it an animal that exists in the field.

Jenny remarked that, in classical Greek, there were no spaces given between words and, in Roman times, all letters were capitalized, with language being predominantly spoken rather than written. Punctuation marks were originally used to tell a reader where to pause, with Aristophenes of Alexandria being one of the first to extensively use punctuation marks for such a purpose. The use of punctuation marks was solidified with the invention of the printing press, as this standardized punctuation marks so that people, wherever they were, would understand what it was that they were reading.

Where everyday usage is concerned, Jenny notes that missing punctuation marks result in legal lawsuits which can amount to the millions of dollars. For the average person, punctuation marks clarify what people mean, and she gave examples of both the impact of punctuation marks in the legal and everyday realms. Social media messaging, Jenny notes, is what she calls “emotional splats” and “fast writing / language / English,” which is analogous to fast food, as those who write such messages don’t think things out before doing so. The result are messages which can be misunderstood, even if emoticons are used. Where the latter are concerned, Jenny believes that these can be useful in conveying emotion but that these may not be needed if people thought before they wrote. 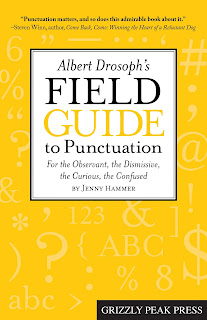 Jenny has noted that punctuation marks have evolved over time, and their history is included in the Field Guide. One of the most surprising things she learned while researching were the histories of some of the punctuation marks as well as some of the fun aspects of punctuation marks that she had discovered. She also noted that a new punctuation mark, the ddolos—which is named after Dolos, the Greek god of deception—is being brought out into the world to indicate statements which are lies, and gave an example where such might be used.

Researching the histories of the punctuation marks was one of the most fun things she experienced while writing the book, while getting correct the Latin terminology for the taxonomy of punctuation marks was challenging for her, as she needed to refer this several times to people who knew Latin. She would recommend those involved in writing to work with the comma and use these properly, as well as the difference between “its” and “it’s.” She also recommends that people be more observant with what they read and write. She also notes that it’s important for people to focus on ideas and supporting these with facts, as writing out something without thinking it through is essentially pointless.

Purchase from Amazon: Albert Drosoph’s Field Guide to Punctuation: For the Observant, the Dismissive, the Curious, the Confused by Jenny Hammer

Posted by alvinwriters at 4:26 AM