In this interview, Suzanne Adam talks to Alexander “The Engineer” Lim, host of AuthorStory by alvinwriter.com, about her book, Notes from the Bottom of the World: A Life in Chile.

“And I would say, to have an open mind, to want to learn or to be curious about the people and that country.” ~Suzanne Adam 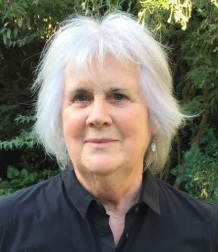 Notes from the Bottom of the World is essentially a collection of essays on a variety of topics that Suzanne wrote over the years, some of which are expanded versions of blogs she had posted. These essays range from childhood memories to travel blogs, and she didn’t intend to have these published in a book when she originally wrote these.

Suzanne was an only child who grew up in a town near San Francisco, after which she joined the Peace Corps. She began teaching after her Peace Corps stint, and it was during that time she met the man who would become her husband, and she went with him when he returned to Chile, and has lived there since then. The couple’s original intention was to return to California, but they wound up settling in Chile, and Suzanne found the process of settling in rather challenging, with one of these being a small-town girl who needed to adapt to a big city. Other challenges included standing in line, during the times of social unrest, to buy food, and getting used to the cold weather.

Suzanne remarks that not having the kinds of foods she had been used to, as well as living frugally, is something that has had a lot of impact on her, and she has noted that there is a lot of waste that is generated today. She has also realized just how important her connection to the natural world was to her, due in a large part to her upbringing in northern California, and she used this to help herself sink roots in Chile. She notes that, in general, people who live in cities tend to be less connected with the natural world compared to those who live in towns and smaller settlements, and that Chileans are becoming environmentally aware at present, with plastic bags being banned in several places and the government pushing for dependence on solar power.

Suzanne notes that Chile’s geography leads to its isolation, as it is separated from other nations by the Atacama desert and the Andes mountains, which has led to the inward-facing society that she saw when she first came over. The nation also wasn’t diverse, socially or culturally, but this is changing now, thanks to interconnectivity and a present influx of migrants from other nations. This immigration is viewed with mixed emotions amongst long-term Chileans, but the reception has been generally positive.

California and Chile are similar, with Chile being a “turned upside-down” version of California where the climates are concerned. Suzanne remarks that the mountainous areas immediately around Santiago, the capital of Chile, tend to be bare of trees, but the southern mountains have a lot of forest cover, and the country’s coast is similar to that of the western United States. 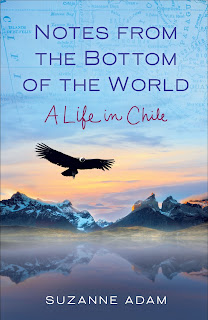 Suzanne admits that her heart is in both the United States and in Chile, as she has lived longer in Chile than she had in the country of her birth. She also notes that Spanish is widely spoken in California, and remarks as well that the golden poppy, which is California’s state flower, grows in central Chile. She notes that Americans could learn to live more frugally, even as she bemoans that Chileans are presently moving towards the same kind of consumer society present in the United States.

To those who would relocate to a land different from their own, Suzanne recommends that they study the local language ahead of time, as not knowing the language would hinder acclimation. She also recommends to learn about the people and the culture and to have an open mind while doing so.

Purchase from Amazon: Notes from the Bottom of the World: A Life in Chile by Suzanne Adam

Posted by alvinwriters at 5:22 PM