Jennifer Cohen on How to Cultivate a Life of Sustainable Abundance

In this interview, Jennifer Cohen talks to Alexander “The Engineer” Lim, host of AuthorStory by alvinwriter.com, about her book, which she co-authored with Gina LaRoche, The 7 Laws of Enough: Cultivating a Life of Sustainable Abundance.

“We have to get into what is scarce versus finite. There are limitations, but we are manufacturing most of the scarcity on the planet.” ~Jennifer Cohen 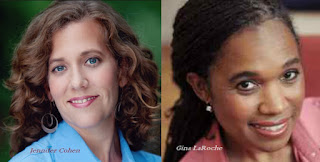 According to Jennifer, The 7 Laws of Enough came about because their publisher asked them to create it, but the book is the culmination of fifteen years of research and inquiry which created the aforementioned seven laws.

Jennifer notes that “abundance” is used in everyday life as a way to justify their excessive consumption, and she notes that reciprocity is about being accountable for returning as much as has been taken. She noted that one of the steps to getting to a knowledge of reciprocity is by taking note of the real cost of producing goods, costs which include environmental impact and impact on people. She gives, as an example the case of Ray Anderson, who owned one of the largest carpet manufacturers in the world, as someone who operated on reciprocity, in that he decided that his company would have zero carbon impact and pollution where the environment was concerned. He succeeded in this aim, and Jennifer notes that there are presently several companies which are also working with reciprocity in mind, as the momentum to do so seems to be “building.”

Scarcity is “the myth of our time,” according to one of Jennifer’s mentors, Lynne Twist, who also adds that this is “the sea and the water that we’re swimming in.” The three elements of this myth are:


Jennifer points out that clean water being a finite resources is true, but that it has not become a scarce resource until recently, as an example, and notes that, even with present methods used in the international food system, there is enough food to feed seven billion people, although this system might not be useful when feeding nine billion people. She also remarks that, while 30,000 children die every day from hunger, this is not due to an insufficiency of food but because present economic models are based on the mindset of scarcity. Jennifer notes that value is driven up because of this mindset, for everything from diamonds to food. Although Jennifer admits that neither she or Gina are anthropologists, she argues that this mindset began with agriculture, when people began stockpiling and hoarding things that were more of one’s share, and also notes that, biologically speaking, the human brain is designed to survive, and that anyone can steal food from another person when their brain believes that it cannot survive unless it does just that - something which comes from a mindset of scarcity. That said, Jennifer points out that the neocortex enables humans to think beyond limbic system survival programming, and that, while this is the seat of human potential, it is difficult to get to a state of fulfilling human potential when one is bombarded continuously by messages which stimulate fear.

Love is the seventh law, and according to Jennifer, where her co-author Gina is concerned, it is the only law. She also notes that, biologically, human beings cannot exist without love. 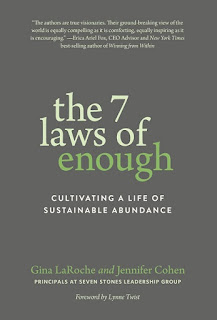 Jennifer noted that leaders tell stories for a different kind of future, then take a stand for those stories and invite people to live into these, giving the examples set by Dr. Martin Luther King, Nelson Mandela and Mahatma Gandhi.

While the American Dream is essentially for a person to be “self-made,” this is an individualist success point of view, and Jennifer points out that nobody is self-made. Nobody does everything alone, Jennifer points out, as people need others to help them carry out what needed to be done; indeed, she mentioned monks in caves, who need support for them to maintain their meditations, as well as that most people don’t know how to make their own clothes or build their own homes.

To those who are struggling, Jennifer says, “It’s not your fault,” and that this moment just might be enough.

Purchase from Amazon: The 7 Laws of Enough: Cultivating a Life of Sustainable Abundance by Gina LaRoche and Jennifer Cohen

Posted by alvinwriters at 11:40 PM