Xanet Pailet on How to Live an Orgasmic Life, Heal Yourself and Awaken Your Pleasure

In this interview, author Xanet Pailet talks to Alexander “The Engineer” Lim, host of AuthorStory by alvinwriter.com, about her book, Living An Orgasmic Life: Heal Yourself And Awaken Your Pleasure.

“There’s so much shame about having shame that you don’t even talk about shame.” ~Xanet Pailet 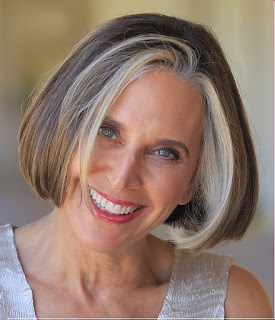 On the surface, Xanet seemed to have it all, with a successful corporate career and a great family and life, but she also had a lot of hidden issues, one of which was that, for her, sex was a physically painful experience. This led to around a decade of a sexless marriage while she was raising her family - which, she points out, is common in one in four marriages - which caused her marriage to briefly fall apart. She finally ended her marriage and realized she needed to address her issues so she could engage in an intimate relationship in the future, and it was when she worked with a Tantric practitioner that she began her journey of sexual healing.

For Xanet, writing the book was a way to bring out some story that was inside of her, and she got the title from the title of her vision board.

Xanet opines that the reason why women still don’t live a life of sexual freedom is because of shame, which she calls “the nastiest five-letter word in the universe.” She notes that shame has been inherited from generations past and shows up in the way people, starting from childhood, are made to be ashamed of their bodies and of their sexuality, which results in discomfort when dealing with one’s body and sexuality. She points out some examples of a boy made to feel ashamed about touching his penis and for children not seeing their parents touch each other, which results in their becoming uncomfortable with physical touch when they are adults. Shame, Xanet notes, is probably the top sexual issue, as one cannot open up to sexual pleasure until one works through the layers of shame that one possesses. Xanet notes that several ancient cultures, such as the Hindus, the Greeks and the Romans, were sex-positive, which showed in the deities they worshipped and their references to genitalia.

One in four women, according to Xanet, have experienced sexual abuse and trauma, and this has had an enormous impact on those who have experienced these, but other factors also come into play, such as women not being able to ask for what they want or not even knowing what they want sexually. Xanet notes that women possess a clitoris, a part of the body whose only function is to give a woman pleasure, but that cultural programming influences women to say “No” to sex, pointing out the different messages told to boys and girls in their teenage years. She also points out the disjunction in sexual messaging for women, in that they are supposed to not engage in sexual relations until they’re married, but once they are married they are supposed to become sexual goddesses - something which is difficult to become when one is unfamiliar with, or ashamed about, sex and one’s body.

Women are more anatomically disconnected from their bodies than men are, Xanet explains, giving the example of the difference in sexual anatomies of males and females. Male sexual anatomy is outside the body, so it is easy to associate pleasure with such natural reactions as erections, but the female sex organs are within the body, so there’s nothing to see, literally, when a female becomes sexually excited.

Other issues that keep women from becoming sexual involve having emotional blocks around certain issues, as Xanet points out that a woman will not be able to express herself sexually when she’s feeling resentful, since women need to feel emotionally connected to their partner before opening up sexually.

Sexual healing is different for every person, Xanet notes, and the journey begins by recognizing that one has an issue to resolve, coupled with a curiosity about what is really going on within oneself. Finding support along the journey is also important, as women are most comfortable speaking about their deepest concerns in an environment where they feel safe, and this can be found in all-female workshops as well as other venues, one of which is the path Xanet took, Tantric healing. Xanet likens the experience of her own sexual healing as that of her being a closed flower whose petals slowly open up over time. She notes that the sex center is the seat of one’s power and creativity, and sexual energy is extremely potent, so that connecting with one’s sexual energy enables one to transform one’s life. Xanet notes that people who are so connected have more confidence and are healthier and less stressed, and that positive things and people then get attracted into their lives.

The most important mental shift necessary for women to take, Xanet remarks, is for them to redefine what sex is, other than the act of intercourse itself. According to Xanet, sex is any action or activity that creates an erotic feeling, which could be as simple as holding the hand of one’s partner or having a massage. This, she notes, takes away all of the expectations and performance anxieties surrounding orgasm, which enables one to become present to the experience, rather than being in one’s head about what one needs to do. “When we’re thinking, we’re not feeling,” Xanet remarks, “and sex is when we’re feeling.”

Xanet also tells women that they are responsible for knowing what they like and what arouses them, which is a big surprise to many that she tells this to. This means that women need to understand their own bodies so they can better communicate this with their partners, to give the latter guidance, particularly if the partner wants to know how to pleasure a woman. Xanet also remarks that women’s arousal shifts change daily, because their arousal system is more complicated than a man’s, and that women need time and some processes to bring them up to full arousal; indeed, “Slow everything down,” is Xanet’s advice, as women take 30 - 40 minutes to get aroused, and building up tension is important where arousal is concerned. 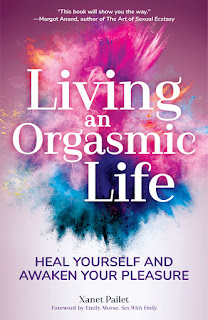 Long-term relationships can remain sexual with partners requires communication, according to Xanet, as both need to talk about feelings, emotions and what works and what doesn’t. She also remarks that this has to be a priority in one’s life, pointing out that a lot of couples stop having sex when raising their children, which means that sex needs to be placed on the calendar as well as to change things up.

To those who are struggling, Xanet notes that they should not give up, as they are not broken and that there is help available. She also recommends that people appreciate what is working in a relationship and nourish these, and for people to be curious about the many ways they can engage sexually with their partners.

Purchase from Amazon: Living An Orgasmic Life: Heal Yourself And Awaken Your Pleasure by Xanet Pailet

Posted by alvinwriters at 4:55 AM