Pardeep Singh Kaleka and Arno Michaelis on Forgiveness after Hate

In this interview, Arno Michaelis and Pardeep Singh Kaleka talks to Alexander “The Engineer” Lim, host of AuthorStory by alvinwriter.com, about their book, The Gift of Our Wounds: A Sikh and a Former White Supremacist Find Forgiveness After Hate.


PLAY THE VIDEO AND LISTEN TO THE THE INTERVIEW ON YouTube.

Pardeep is a first-generation immigrant, having come from Punjabi, India at the age of six, when his parents wanted a better life and opportunities for themselves and their family. They settled in Milwaukee, Wisconsin and essentially followed the American dream, and thanks to their parents’ hard work Pardeep and his family were able to go to college, with his brother becoming a teacher and Pardeep, a police officer. He is a Sikh, which is a religion which is concerned with seeing the humanity in others, and Sikhs are expected to be learners.

Arno grew up in Milwaukee, in a good neighborhood, but in an alcoholic household, with his parents struggling. The conflicts led him to lash out at others, and as he grew older, he got stimulated by antisocial, violent acts. He began drinking at the age of sixteen and first got involved with white supremacists while listening to music geared towards that audience. He spent seven years in neo-Nazi hate groups as a leader and street fighter, but he felt an increasing sense of exhaustion and isolation in that time, particularly since the people he was supposed to hate treated him with kindness when he least deserved it. Arno remarked that everything that he did was designed to provoke hostility, hate and fights, but when he was treated with kindness he didn’t know how to react. He eventually decided to leave when he became a single father to a baby girl and one of his friends was killed in a street fight, which made him present to the fact that a lot of his friends were incarcerated, and that if he himself didn’t change, he would wind up like them. He then spent the next seven years healing, then stopped drinking, began writing and founded an online magazine, Life After Hate and now works as a counter-violent extremist consultant.

On August 5, 2012, one of Arno’s former colleagues shot and killed six people in a Sikh temple, one of whom was Pradeep’s father, before being killed himself in a shootout with responding policemen. Pardeep then reached out to connect with Arno a few months after the shooting, and since then, the pair have been working together to break the cycle of hate which breeds more hate and racism.

While Arno doesn’t believe there is an excuse for hate and violence, he remarks that there is always a reason. Whatever the ideology under which the hate and violence blossoms, the common thread is a background of suffering and pain within an individual. Pardeep seconds this, saying that there are a lot of issues related to vulnerability amongst individuals who lean towards extremism and violence. 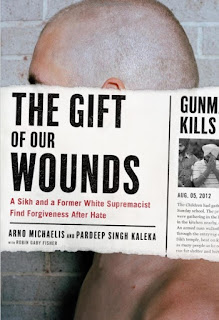 Irresponsibility is the main source of racism, according to Arno and Pardeep, where it is easier to blame someone else, or another group, as being the source of one’s perceived poor status in life, rather than confront oneself about one’s own behaviors and actions that had brought one to that state. Such blame enables one to disconnect from the reality of one’s life, and Arno notes that white supremacist groups prey upon this mix of frustration, discontent and blame to recruit people, which only accelerates the person’s downfall, rather than enabling them to find ways out of their situation.

Pardeep notes that, in the United States, a lot of judging goes on about people involved in white supremacist groups, which keeps people from recognizing the pain and historical trauma of such ideologies. A more mindful culture, according to him, is necessary to solve the concern, rather than demonizing the people, as there is no way out for the person once that is done. Rejection, real or perceived, is the trigger for violence in a lot of mass shootings, according to Pardeep, and Arno remarks that violence is also an attempt to find control something in their life when everything else isn’t in control. He then adds that he and Pardeep, as part of their work, help people to see that controlling the lens through which they view the world, be it for evil or for good, is a powerful thing. Arno also notes that responding to antisocial behavior with compassion, rather than aggression and vengeance, breaks the cycle of violence, without accepting such behavior as normal. 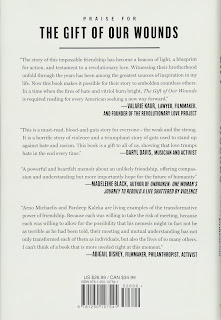 Pardeep notes that the interplay of factors in racism is complex, as it exists in history and society as well as individuals. Resolving the concern, he says, requires that society become a solution-focused one, rather than the judgemental, blaming one that it presently is. Arno remarks that one thing people can do is to see oneself in others, particularly when those other people do harm.

To those who are deeply involved in racist ideologies, Arno would ask them if they know someone of their race who could make better decisions in their life and if they know someone of another race who is hard-working and likeable. To those who are on the receiving end of a hate crime, Pardeep would like them to know that pain, however painful, has a purpose with regard to one’s life journey.

Arno notes that, as human beings, it’s in our nature that we find what we seek, so those who find reasons to be hateful and outraged will find such, while those who seek inspiration will find it. This is something which Pardeep calls a “choice bias,” and whatever one chooses to invest in gives greater weight to one’s own beliefs.

Purchase from Amazon: The Gift of Our Wounds: A Sikh and a Former White Supremacist Find Forgiveness After Hate by Pardeep Singh Kaleka and Arno Michaelis

Posted by alvinwriters at 6:46 PM