Dr. Michael S Scheeringa on A Parent's Guide to PTSD in Youth

In this interview, Dr. Michael Scheeringa talks to Alexander “The Engineer” Lim, host of AuthorStory by alvinwriter.com, about his book, They’ll Never Be the Same: A Parent’s Guide to PTSD in Youth.

“Parents, it’s up to you.” ~Dr. Michael Scheeringa 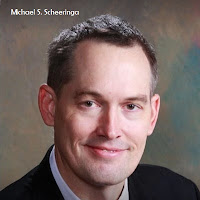 As a young, newly-trained doctor, Michael was interested in preventing child abuse, but found that field to be too ambitious to tackle, so he went into research into the effect of trauma on children - post-traumatic stress disorder (PTSD), in other words. He accumulated a lot of information from his research and clinical work had been spending time speaking about the matter to his colleagues as well as leading training workshops on the matter, but he felt that the word wasn’t going out as quickly as he felt it should. He thus wrote They’ll Never Be the Same in an attempt to let parents and the ordinary person know the symptoms and effects of PTSD on children.

Michael notes that PTSD springs from experiences which children consider to be life-threatening, rather than experiences which are stressful but don’t get up to the intensity of being life-threatening. The events are sudden, unexpected, sheer moments of panic, which can take place during such events as natural disasters, attacks by dogs (for young children), witnessing domestic violence and the like. That said, he agreed that not everybody reacts the same way to the same situation, due to the difference in the way children perceive things, with one child being in a car accident and getting traumatized and another child in the same accident not being traumatized, and he infers the possibility that this could be due to the way each individual’s brain is wired. Michael notes that, where the issue of being separated from parents is concerned, such an event isn’t necessarily life-threatening, although it is stressful, unless it’s done in a very frightening way.

Some of the myths that Michael points out about childhood PTSD are:
Michael remarks that parents can tell if a child suffers PTSD by seeing a sudden change in a child’s behavior. PTSD is the only psychological disorder which manifests itself immediately, so something like a child being happy and expressive one day and literally withdrawn the next day is a symptom of PTSD. He also notes that there are twenty different diagnostic indicators for PTSD, which fall into three types:
Therapies for PTSD will never enable the child to totally heal. The best that can be done is to enable the child to live with the event, similar to how people would live with diabetes or chronic back pain, for the rest of their life. That said, such therapies will enable those who are successfully treated to live out their live productively.

Michael remarks that psychotherapy is the first line of treatment for PTSD, as it has the best long-lasting effect. There are different types of psychotherapy for PTSD, and one of these, which Michael recommends and uses, is Cognitive Behavioral Therapy (CBT). This is a form of evidence-based treatment, which means that the therapy has been tested in randomized clinical trials and has been shown to work, unlike other therapies which have not been clinically tested at all. CBT consists of twelve to fifteen weekly sessions, with the patient learning new coping strategies at the start of the process, after which they need to start talking about their trauma in a gentle, guided way to enable them to gain mastery of the negative feelings they have about the event. Michael notes that up to 75% of his patients have had success with CBT, and the other 25% need help in addition to CBT, such as through medication.

Michael estimates that 90% of all children with PTSD aren’t so diagnosed, as most clinicians nowadays aren’t trained to recognize PTSD in children. For the moment, it is now up to the parents to seek help for their children by finding their own assessments, such as those on Michael’s website, and then looking around for therapists who can help them out. Some of the questions Michael recommends parents to ask, to find the right kind of therapist, are: 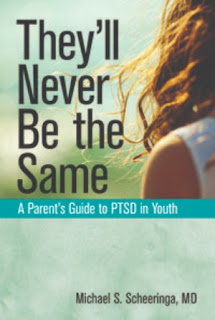 He also says that parents should switch therapists if the therapist they are working with doesn’t seem to be effective.

On the subject of studies conducted on brains of people who suffered PTSD, Michael remarks that the present conventional wisdom is that those peoples’ brains have suffered changes due to PTSD but notes that most of this wisdom is based on studies which didn’t have a reference image of the brain prior to PTSD and those images after the event which triggered PTSD took place. He notes that some newer studies, which do use “before and after” imaging, indicate that the brain structure didn’t change before and after the event took place, and that it is likely that some people are more vulnerable to PTSD than others because of the way their brain is structured.

Purchase from Amazon: They’ll Never Be the Same: A Parent’s Guide to PTSD in Youth by Dr. Michael Scheeringa

Posted by alvinwriters at 8:01 PM