Danny Kofke: How to Be Wealthy on a Teacher's Salary (Even if You're Not a Teacher)

In this interview, Danny Kofke talks to Alexander “The Engineer” Lim, host of AuthorStory by alvinwriter.com, about his book, The Wealthy Teacher: Lessons For Prospering On A School Teacher’s Salary.

“It’s really easy to spend money without thinking about it.” ~Danny Kofke 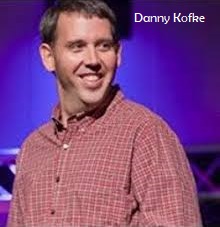 The Wealthy Teacher is actually Danny’s fourth book, all of which deal with creating financial freedom for oneself based on his own experiences of doing so on a teacher’s salary. His methods have resulted in his presently being debt-free and have enabled his wife to be a stay-at-home mom for nine years, with the family living on his salary alone. The Wealthy Teacher is intended to make the reader look at one’s overall financial picture and take the exact steps needed to create financial success - the kind which, Danny explains, would enable someone to leave one’s employment if one dislikes the situation there.

Danny’s childhood environment was a happy one, despite his family not being well-to-do, and it was then that he noticed that those among his friends who had a lot materially weren’t happy - something he continued to notice amongst adults as he got older. When he married, he agreed with his wife that she should be a stay-at-home mom and look after the children for a few years, which meant that they needed to get their financial plan straight for the next several years, one which would keep them out of debt.

Where a teacher’s salary is concerned, Danny notes that, over time, a teacher’s salary is a decent amount, but salaries are low for beginning teachers, which presents a challenge at a time when one is establishing one’s life and career. Danny notes that the low pay is particularly challenging to today’s teachers, as they also have to deal with the home life issues of students and that, even before they start working, teachers already have to deal with student loans.

Where the average American is concerned, Danny recalls a survey recently conducted which showed that around 70% of all Americans would need to borrow money to cover a $400 emergency. For his part, Danny has a one-year emergency fund and a retirement account as well as having no debt, and more importantly he and his family live wealthy lives.

Debt is “90% behavior,” according to Danny, pointing out that income and outflow is 8th-grade math. It’s easy for people to spend money to make themselves feel good when they feel unhappy, and Danny points out that that the feeling of “good” doesn’t last long while having an impact on their future financial standing. He also points out that people get into trouble when they spend more than they earn, citing a survey done by a sports magazine which noted that several NBA players file for bankruptcy five years after retirement.

Danny notes that people not only need to have short-term and long-term goals financially, but also need to know the why behind those goals. The example he gives is of wanting to have enough in retirement to enjoy outings with his grandchildren, which keeps him from buying a brand new car and placing what would have been his monthly payment money for the car into his retirement fund.

The Wealthy Teacher includes things to do to get people on the path to financial freedom, starting with setting goals and knowing why, after which he goes over such things as having proper insurance and getting a will. He also goes into saving an amount for expenses and having an emergency fund, then about getting out of debt, which he notes is essentially money one owes before one even gets a job. Danny points out that life and consequent expenses happen, and that having a financial margin available turns a catastrophe into a mere inconvenience. He also then notes about investing for retirement and then paying off one’s mortgage, finishing off with being financially free.

Danny notes that the concept of “wealth” is subjective, as being wealthy is what one makes of it, and his definition of wealth is having the freedom to pursue what one is passionate about. He gave the example of being able to travel around Europe during his two-year stay in Poland with his wife while still being able to save up money for the inevitable return to the United States, which meant that neither of them felt deprived of the experience of living overseas. Danny noted that they were able to save because they paid themselves first by putting aside, as soon as they got their paychecks, a fixed amount of money for their future needs, which gave them some $20,000 to start off their life in the United States. This practice is the reverse of how most people operate, in that the latter pay off their expenses first and then enjoy what’s left. 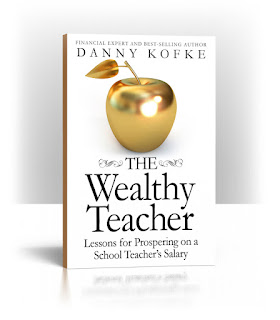 Danny’s basic advice to people, particularly those starting out in life, is to keep track of their expenses, to know where, exactly, their money goes. He and his wife did just that for a month, shortly after they got married, and the figures they came up with helped them set up their monthly budget. Danny notes that most people have an outflow problem, rather than an income problem. He also points out that a lot of people don’t take advantages of the opportunities offered them because they literally can’t afford to, and gave the example of his becoming an author because he could afford to take advantage of that particular opportunity, which has consequently enriched his life in many ways.

Purchase from Amazon: The Wealthy Teacher: Lessons For Prospering On A School Teacher’s Salary by Danny Kofke