Ilan Wurman on A Debt Against the Living: An Introduction to Originalism Book

In this interview, Ilan Wurman talks to Alexander “The Engineer” Lim, host of AuthorStory by alvinwriter.com about his book, A Debt Against the Living: An Introduction to Originalism.

The genesis for A Debt Against the Living began when Ilan was studying in law school. He had heard about originalism and when he went looking for a short, general introduction on the topic he couldn’t find one, and it was over the course of the years that he realized that such an introductory book needed to be written. Ilan subsequently wrote A Debt Against the Living, which serves the purpose of being the introduction to originalism that Ilan wished he could get his hands on while he was in law school. The title of the book is based on a phrase found in an exchange of letters between James Madison and Thomas Jefferson, and the book is readable and accessible for the general reader. It is a distillation of the arguments and findings about originalism and the United States Constitution, and is also aimed at anyone who’s curious about the Constitution, originalism and how it is judiciously interpreted. (Ilan also remarked that, in his opinion, some forms of legal documentation would be better written in the conversational manner that the book was written in.)

Ilan remarks that the Constitution is a law that the people of the United States enacted to bind the governing officials of the country, which means that it is important to one’s everyday life, as it touches on everything within the country itself.

Ilan points out that the older version of originalism was based on “original intent,” where the intent of the original framers was the basis of a judicial ruling. Present-day originalism looks at the original public meaning of the words, regardless of secret intent behind the words themselves, taking into account the context in which those words were written, as well as the legal effect of what that particular meaning has in the world at large.

One of the largest alternatives to originalism is living constitutionalism, or “common law” constitutionalism, which believes that precedent matters more than text. With this alternative philosophy, judicial precedent develops over time, as society evolves, and this philosophy gives judges the authority to change the meaning of the law, regardless of the original text and intent of the Constitution, to make it more adaptable to changing circumstances. In this view, the Constitution needs to be updated as time goes by, particularly if the mechanisms in place make it hard to make changes. This can get tricky, as unelected officials can then make fundamental changes to law based on their personal belief on what needs to be updated, regardless of what the people believe. 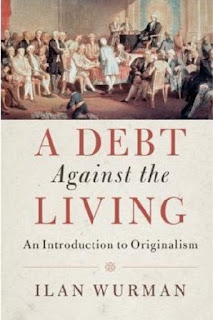 Ilan points out that originalists need to defend the Constitution as still being valid after all this time, as it balances the twin, competing objectives of creating a regime of self-government and protecting natural liberty. He points out that his is achieved in the Constitution through such mechanisms as separation of powers, the bill of rights, checks and balances and the enumeration of powers. Ilan also noted that the Constitution was deliberately written in “broad strokes,” as it was intended to be an enduring document which takes into account possible future circumstances.

Ilan remarks that the appointment of originalist judges in the various circuits has an impact on how the United States will operate, and gave an example of a farmer whose consumption of wheat for himself was impacted by law, because of the imposition of federal law, as well as the admissibility of evidence in court, given the circumstances under which that evidence was obtained.

Purchase from Amazon: A Debt Against the Living: An Introduction to Originalism by Ilan Wurman


Posted by alvinwriters at 2:25 AM

Email ThisBlogThis!Share to TwitterShare to FacebookShare to Pinterest
Labels: A Debt Against the Living, alvinwriter.com, An Introduction to Originalism, author interview, AuthorStory, being an author, books, Constitution, Ilan Wurman, inspiring story, US, writing inspiration