Chamin Ajjan talks to Alexander “The Engineer” Lim, host of AuthorStory by alvinwriter.com about her book on dating, Seeking Soulmate: Ditch the Dating Game and Find Real Connection.


“The other person is not an extension of your worth.” ~Chamin Ajjan 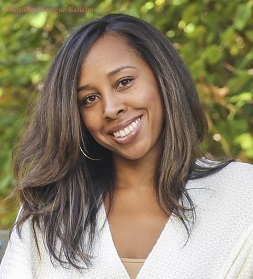 As a psychotherapist, Chamin Ajjan notes that writing a book creates credibility, and while she wanted to write one she felt she was too busy, as a working mother, to do so. When an acquisitions editor from Parallax Press saw her blog, liked it, contacted Chamin and suggested she write a book, Chamin then told her husband who then suggested the same thing. And so, Chamin did.

Chamin wrote Seeking Soulmate in a way that the tools within are easily understandable, usable and fun, making it as relatable as possible. She used her own personal and clinical experiences to help her write it, noting that single patients who are in therapy inevitably talk about their concerns about dating. Chamin remarks that dating is something that everybody does at some point in their life, which makes it a commonplace activity that everyone does. She also noted that dating is a vulnerable experience, as people are in a situation where rejection is part of the process, and has dealt with men, women and people from all walks of life, be they gay, old, young and the like.

Chamin remarked that both men and women have the same pitfalls where dating is concerned. One of the most common mistakes she sees is wanting one’s partner to have qualities that one does not, qualities which fill the missing pieces in oneself. This is a mistake, according to Chamin, as one should be whole and healthy and seeking someone to enhance one’s life, rather than to find someone who will fill the missing pieces in one’s life. Chamin notes that people do this because they struggle to look at themselves and their problems and what is missing in themselves objectively. The result of a relationship where one or both partners seek to fill a void in themselves with the other is a problematic relationship, as the other person’s role is not to complete one but to enhance one’s life. The other person will feel that one is a burden to that person, trapped and wanting to escape the situation or retaliate, and one then resents the other person for not giving the things that one would expect in order to feel complete.

One of the other concerns that Chamin noticed is the feeling that one has to sleep with, or wants to sleep with, the other person too quickly. While Chamin sees nothing wrong about having a sexual connection with another, she remarks that doing so too quickly results in lust mimicking love, which creates the illusion of love. This, according to Chamin, is a bad foundation to create a relationship, as it is based on hormones rather than commonalities.

Cognitive Behavioral Therapy (CBT) is one of the most researched and evidence-based psychological treatment methods in use today. It is about understanding the relationship between thoughts, feelings and behavior, as thoughts affect the way one feels, feelings affect how one behaves and behavior affects one’s thoughts. Changing any one of these affects the other two, and once one figures out the relationships amongst these one can intervene to make changes in one’s life. Chamin notes that it’s not possible for one to tell oneself, “I won’t feel angry/jealous/sad,” but one can change what one does or how one thinks about the situation to make that change. Chamin then gave an example of how negative thoughts about dating affect one’s feeling and how to challenge these thoughts to break the cycle and change that aspect in one’s life. Chamin notes that people have thousands of thoughts every day, most of which are ideas rather than facts; and as these thoughts are ideas, these can be challenged, rather than be allowed to stop one from one’s ultimate goal.

Mindfulness, according to Chamin, is about being aware of what is happening in the present moment instead of being focused on either the past or the possible future. Bringing mindfulness into one’s everyday interactions in a non-judgemental way enables one to learn to sit with those thoughts, be curious about these and then deciding whether or not to go with such thoughts. This is where the power lies in mindfulness, Charmin remarks, as it doesn’t lie in controlling but in letting things be and making choices based on these. Mindful dating is a combination of CBT and mindfulness which is brought into romantic and dating encounters, and this allows one to get in touch with oneself and to create a real connection with the other person. Chamin also remarks that “we live in this very strange time,” when technology intended to keep people connected becomes a source of disconnecting with the person one is dating when it is integrated into the date. 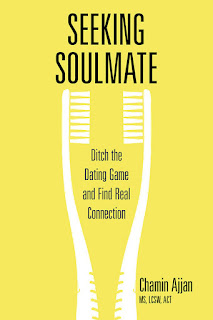 To those who are getting tired of dating, Chamin recommends approaching their date from a mindful space and gave the practice of “tail-dating” as an example. “Tail-dating” is based on “tailgating,” which is done before big athletic meets, wherein one gets connected with oneself, and then gave her own personal tail-dating activities as an example where she troubleshoots what might happen during the date as well as creates the intentions before the actual date itself. She also notes that one should also plan for the date and should be gracious and thankful and, to end the tail-dating, to affirm oneself in order to center and be attuned to oneself.

Charmin notes that the message of her book is about enabling oneself to become aware of oneself, so that the same patterns and situations will not be repeated and that one can be the person one is, instead of the person that one thinks the other person would want one to be.

Posted by alvinwriters at 1:29 AM