Winifred Reilly talks to Alexander “The Engineer” Lim, host of AuthorStory by alvinwriter.com about her book, It Takes One to Tango: How I Rescued My Marriage with (Almost) No Help from My Spouse - and How You Can, Too. 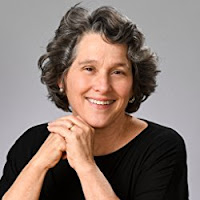 Winifred has been a writer all her life, writing poetry when she was a little girl. She has been a marriage and family therapist for nearly forty years, getting into the field because her own marriage wasn’t doing so well and she wanted to know everything she could about marriage. Over the course of that time she heard from several clients that they had no books that they could refer to where their particular challenges were concerned, and this was one of the reasons she wrote the book.

Winifred felt she needed to write the book, and noted that she initially started the book as a collection of her clients’ stories, but after traveling down this particular path for a time she realized that it was very boring. Winifred then realized that writing her book as a personal story would be more effective, and so wove in the story of her own marriage as one of the book’s themes, with the other two being the story of her training and the stories of her clients.

Winifred notes that, where marriage is concerned, everyone is in the same boat, so therapists couldn’t hide behind the curtain of authority to be effective. She also notes that the skills necessary to maintain a marriage long-term are learned along the way, rather than learned prior to marriage.

Winifred remarked that people try to agree, to create consensus, rather than figure out what to do when they disagree. Agreeing to disagree means that people can’t come to any conclusion, and while this might be okay for relatively minor things, this doesn’t work with deeper issues, such as having another child or moving out into the country. Winifred notes that partners need to tolerate one’s spouse disagreeing with one, and that staying connected with oneself while remaining open to the other is a fine art.

Winifred notes that there is no formula for how people take a stand. She does, however, point to a developmental model of marriage which was devised by psychotherapists Ellyn Bader and Peter Pearson, who run the Couples Institute in Menlo Park, California, which has five stages of marriage: 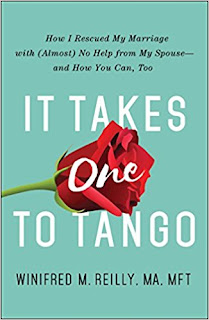 Purchase from Amazon: It Takes One to Tango: How I Rescued My Marriage with (Almost) No Help from My Spouse - and How You Can, Too by Winifred Reilly.

Posted by alvinwriters at 6:03 AM