Donna M. Orange talks to Alexander “The Engineer” Lim, host of AuthorStory by alvinwriter.com about her book, Climate Crisis, Psychoanalysis and Radical Ethics.

“Telling people things doesn’t seem to be getting us anywhere.” ~Donna M. Orange 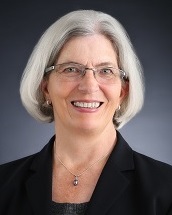 Donna comes from the Pacific Northwest, and after becoming a philosophy professor she became a psychoanalyst on the East Coast for some thirty-five years. She recently retired to Claremont, California, where she focuses on the topics covered in her book, as she felt the climate crisis when she returned to California, heard nothing from psychoanalysts where climate crisis is concerned and had been influenced by her philosophical studies into radical ethics. She developed the book in reaction to her own realization about the nature of the present climate crisis and the suffering experienced by those who are affected by climate change, and also as a way to explain why people are turning away from the issue of climate crisis from her psychoanalytical experiences and perspective.

Donna explains that “radical ethics” comes from a Jewish and a Christian philosopher who argue that “The other comes before me,” which is an ethical attitude that is radically different from the present attitude in the West, which is about focus on what is good for oneself and one’s immediate family above all else. Radical ethics essentially describes how people would treat each other, and highlights the responsibilities we have to other human beings.

Donna points out that there are several aspects about the present mindset that feed into climate crisis, with political climate denial being based on political and financial advancement being one, and with another being disavowal, which is an inability to face the situation, and to thus avoid it as it occurs as being too big and too scary to be handled. Double-mindedness is a psychoanalytic concern and is when people know how bad the situation presently is, but still go on behaving as if the change isn’t taking place which, to Donna, stems from being overwhelmed and ashamed and trapped in egoistic individualism. Donna points out that the science is solid, and that facing up to this is a psychological matter.

Donna also noted that there are cultural elements that perpetuate the present attitude towards climate crisis, which includes colonialism and slavery. She points out that people in the United States aren’t present to that they live on stolen land, and compares Canada to the United States in this regard, pointing out the Canadian children hear a declaration that they live on the lands of the First People who have lived on it. Donna remarks that, because Americans are unconscious to the suffering they have historically inflicted, they are unconscious to the suffering of others caused by climate crisis, and that the United States will lead the world into the disaster of climate crisis. 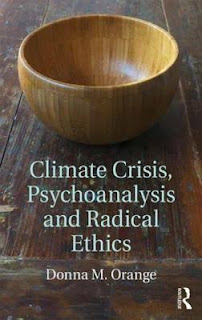 Donna believes that people need to stand up and be counted to do work to deal with the issue of climate crisis, and notes that psychoanalysts seem to be waking up to that their work isn’t just about helping out individuals with their concerns, but that they are also citizens of a global community. She points out that the Climate Psychology Alliance, which is an organization of psychologists and psychoanalytics, is an established organization in Great Britain and she hopes that a similar organization can be set up in the United States. She points out that people need to be moved “for more than fifteen minutes” for true change to take place, particularly since climate change isn’t easily visible to the common person, and that radical ethics has a place through the respect for other spiritual traditions. Donna also notes that alliances need to be created with religious and spiritual leaders due to the influence these have.

To those who wonder about climate change, Donna would ask them about the kind of world they would want to live in two or three decades from now, after which they should imagine what the world will be like for themselves and the people around them if things continue the way they are. She noted that young people are willing to ask themselves such questions and would like to ask everyone to think that all humans are connected to each other and matter to each other.

Posted by alvinwriters at 5:20 PM