Siphiwe Baleka and His 4-Minute Fit Book to Enhance Metabolism

Siphiwe Baleka talks to Alexander “The Engineer” Lim, host of AuthorStory by alvinwriter.com about his book, 4-Minute Fit: The Metabolism Accelerator for the Time Crunched, Deskbound, and Stressed Out. 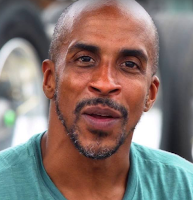 Siphiwe was a world-class swimmer in college, and had been an athlete since he was young. He took a job as a trucker, and within two months of taking the job, he gained fifteen pounds, which was over ten percent of his body weight, which scared him. He realized then that he needed to take responsibility for his weight, and then went on to try out various fitness programs and diets. He realized that there was no such program specifically designed for long-haul truck drivers and their particular environment, and so went out and developed his own. Siphiwe then studied metabolic endocrinology and used digital sports equipment to help his progress, and it was through these that he discovered that his metabolism was so low when he was driving trucks that he needed to find a way to keep it up while driving.

Siphiwe noted that truck drivers actually have an unhealthy profession, as they have highest rates of obesity, the highest rates of metabolic syndrome, and has the lowest life expectancy, and this is due to the nature of their work and on the impact on their bodies. He notes that truck drivers don’t have access to kitchens, have no refrigerators in their trucks to store food in, and drive mostly on the main interstates and highways, which makes such things as getting to a local farmer’s market, or even the gym, impractical, and remarks that, for all intents and purposes, truck drivers “might as well be astronauts living in outer space.” Truck drivers are also subjected to changes in schedule, depending on what they haul, and this disrupts the body’s internal rhythms and hormonal releases, as truck drivers thus train themselves to override these internal rhythms and the hormones that regulate metabolism. This often results in such things as truck drivers not getting hungry, and as they don’t eat their metabolisms turn off. Siphiwe points out that the average truck driver eats only once or twice a day, and while they may overeat during those times, their bodies are, overall, starving, which makes their body store fat.

4-Minute Fit is based on the work Siphiwe has done since 2012, working with truck drivers to improve their physical wellness. It is a program that shows how to turn one’s metabolism on at the start of the day in four minutes’ time, and then how to keep it on throughout the day, with minimal effort. The idea for the book came from an editor for Sports Illustrated who had done an article for what he was doing, and Siphiwe figured, if truck drivers can do it, anyone can. According to him, one in three Americans is obese, and this costs 150 billion dollars a year, and he also points out that the main reason that seven out of ten applicants to the United States Armed Forces are rejected because they were obese or physically unfit.

Siphiwe notes that losing weight is easy; keeping it off is the true challenge, as this requires a change of behavior, which then requires one to get into one’s values and emotions, as the source of behavior is usually subconscious programming. Siphiwe thus wants to get to a person’s motivation behind their desire to change, and while he admits that this can be emotional, he notes that emotion is also energy which can be harnessed. Siphiwe then starts by knowing where a person is nutritionally at the present, identifying the food which the person presently eats which does the most damage and then eliminating that during one week, and then doing the same with another food the following week, which makes for a gradual change rather than a fast overhaul.

Siphiwe notes that he has cases of drivers who have lost weight and kept it off for years, as well as others whose health has greatly improved over a long period of time, and since his program is the least disruptive one around it can be used by anyone. He notes that the science behind his system has been around for three decades, and what he adds to that is turning on metabolism at the start of the day and then keeping it up by giving it what it needs when it needs it. 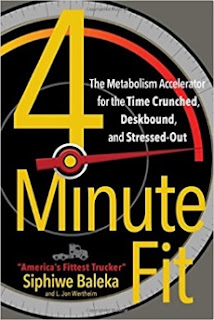 Siphiwe notes that there is a direct relationship between what one gets out of life and one’s health; and the more one can do what they want to do when they want to do it (which is his definition of fitness) the more one can do and experience, which enables one to learn, grow and receive from the Universe. He notes that all motivational speakers always ask: “What’s your ‘why’?” and the “why” needs to be so big that it gives one enough energy to do the necessary and inconvenient things needed to achieve one’s goals.

Siphiwe noted that he has partnered with Progressive Commercial Insurance to create free content which people could use to get started at truckerterritory.com.

Purchase from Amazon: 4-Minute Fit: The Metabolism Accelerator for the Time Crunched, Deskbound, and Stressed Out by Siphiwe Baleka and Jon Wertheim

Posted by alvinwriters at 2:30 AM