Lisa Danylchuk on Recovering from Trauma and Stress

Lisa Danylchuk talks to Alexander “The Engineer” Lim, host of AuthorStory by alvinwriter.com about her book, Embodied Healing: Using Yoga to Recover from Trauma and Extreme Stress.

“The slower you go, the faster you get there.” ~Lisa Danylchuk on Embodied Healing

Lisa is both a licensed marriage and family therapist and a registered and certified yoga teacher who has worked with various people, such as those in low-income areas, on issues related to stress. She wrote the book so she could reach those whom she couldn’t reach directly. It is primarily intended for those people who deal with those suffering from trauma, giving a foundation of treatment and yoga philosophy, as these presently exist, to help those suffering from trauma. There was no single incident that made Lisa think about writing the book; rather, it was a long-time process that arose from her yearning to write a book.

Lisa noted that stress is not necessarily a bad thing, as a certain degree of such is necessary in our daily life and is good for us. Extreme stress and trauma, however, impacts the entire human system - mind, body, energy, spirit - particularly the nervous system, which gets either hyper-aroused (which results in such emotions as anxiety and anger) or hypo-aroused (a parasympathetic reaction which results in such emotions as depression and dissociation, or numbness and “checking out”). She notes that traumas can spring from physical threats (such as physical violence) as well as emotional threats (such as bullying), and that different people respond differently from the same situation - depending on personality, how they were raised and other factors, with one person suffering long-term trauma from one situation while another would just shrug it off.

Lisa stresses that such reactions are a normal human reaction to an abnormal environment or situation, such as physical abuse in the home and chronic violence next door, and the treatment depends on how the person so traumatized reacts, rather than on the situation itself. A proper treatment thus needs to be tailored to the individual concerned, and knowing what questions to ask and what choices to make are thus very important.

Lisa noted that different populations have different percentages of people who suffer from trauma, and she remarked that, while trauma has been a recognized condition ever since it was first labeled as “shell shock” in World War I, the traditional therapies, which included electroshock therapies, weren’t based on a full understanding of trauma, and were thus crude. Lisa noted that, even in the past twenty years, trauma treatment has progressed a great deal, but that there also is more to learn. She also remarked that she has a wide variety of methods she can use and chooses the particular treatment for a particular patient, and that shame is still a major obstacle for people who are seeking help for trauma, which makes a good relationship between the patient and the therapist vital to the process itself. 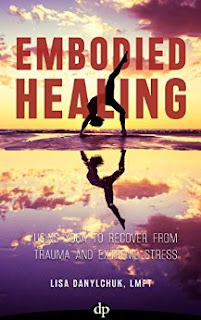 To someone who is suffering from stress, Lisa would first ask how they want to feel, and that, as instilling hope is very important, she would then tell them that it is possible to heal and recover from trauma, that there is help available out there and that they should get help. Lisa notes that those who have healed from their traumas are happy to share their experience, and that trauma is not about the person involved, since bad things happen to anyone.

Lisa wants to write a book on healing in general in the future.

Lisa Danylchuk’s website for her book, Embodied Healing: Using Yoga to Recover from Trauma and Extreme Stress, is howwecanheal.com.