Deborah Shouse and Caring for a Loved One with Dementia | Creative Activiti...

Deborah Shouse and Ron Zoglin talk to Alexander “The Engineer” Lim, host of AuthorStory by alvinwriter.com about their book, Connecting in the Land of Dementia: Creative Activities to Explore Together.

“What we really want in all our relationships is meaningful moments of connection.” ~Deborah Shouse

Deborah got involved with dementia when her mother was diagnosed with the condition, and she wrote a journal to help her get a handle on the situation, while Ron, for his part, got involved when, first, his mother, then his father, became similarly afflicted after Deborah’s mother had passed on. 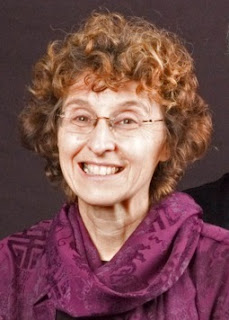 It was at a literary gathering when Deborah had a reading of one of her pieces on dementia, and when, after that reading, several people came up to her, remarking that their own relatives were going through it. Both Deborah and Ron realized that there was a need to share such stories with the world. This became the basis of Deborah’s first book, Love in the Land of Dementia: Finding Hope in the Caregiver's Journey, and it was after that - and after watching the documentary, Alive Inside, when Deborah wrote Connecting in the Land of Dementia with Ron’s help, even though she originally wanted to write a book on Dan Cohen, the doctor featured in Alive Inside.

Deborah and Ron noted that creativity and imagination are still very much intact, and may even be heightened, in a person afflicted with dementia, even if the cognitive parts are no longer intact, and Deborah gathered information not only from people whose relatives had dementia but also from experts in the field, while doing research for this book. It became clear that new methods are presently being developed to enable those looking after people with dementia to connect with them, as the old methods of connection no longer work.

Ron noted that there have been lots of changes done in the field of dementia done in the past few years, and that these center around creative activities by which caregivers can connect with those they look after. Art, music, gardening, movement, poetry and other methods are used to enable such a connection and create something that both can do together, with Ron and Deborah mentioning stories where cooking and food was a way for caregivers and their charges to connect with each other. Deborah then noted that the caregiver has to accept the person they are looking after as they are, and must be the one to journey to where that person is, which takes practice.

Deborah noted that there is a social stigma associated to living with dementia, but that at the end of the day, our basic need to want to be active and engaged doesn’t stop with a cognitive impairment. She noted that “dementia” is actually an umbrella term that applies to different types of cognitive impairment, of which Alzheimer’s is just one type.

As connecting with people afflicted with dementia was something that Deborah and Ron experienced while looking after their own parents, and Ron remarks that the creative techniques presently available were those he wished he could have used while he was looking after his own parents, as these have just been newly brought out. Deborah noted that most people respond at some level to their favorite music, and that food is a common experience to everyone, hence its viability as a method of connecting. 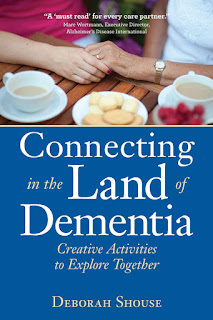 Deborah was surprised by the breadth of ideas and activities that are explorable, and noted that open-ended questions can be used successfully to prompt people with dementia, as such questions don’t create judgment or let those with dementia feel that they’ll be corrected. Deborah remarks that caregivers need to connect with others to get the support they need, rather than feel isolated as they look out for their charges, to take care of themselves, and to appreciate the journey they are on, as it could be a wonderful, spiritual journey, while on the other hand, according to Ron, humor and flexibility are what are important for caregivers.

The website for Deborah Shouse’s and Ron Zoglin’s book, Connecting in the Land of Dementia: Creative Activities to Explore Together, is dementiajourney.org.

Purchase from Amazon: Connecting in the Land of Dementia: Creative Activities to Explore Together by Deborah Shouse with Ron Zoglin

Posted by alvinwriters at 6:23 AM