Rachel Dunn talks to Alexander “The Engineer” Lim, host of AuthorStory by alvinwriter.com about her latest book, Better Videos: Stand Out. Be Seen. Create Clients.

“Don’t listen to the limiting beliefs of what you think that thing stands for.” ~Rachel Dunn

Rachel has been in the television industry for over two decades now, and as early as the age of fifteen she knew she wanted to be a video director, which everyone around her, at the time, regarded with askance. She worked with a lot of TV stations and created a company, Girl Director, which she uses to help empower other people to create videos.

Rachel wanted her book to essentially be a kind of mentor to people who want to create videos and who have been in the video business for a long time but who might have lost sight of what they wanted, as well as people who haven’t done videos before and who are trying to create these. Rachel hadn’t intended to write a book, but after meeting with publisher Angela Lauria, she found that Angela’s goal of making a difference in writing was congruent with her own desire to make a difference with videos. She admits that writing out the book helped boost her confidence greatly and gave her an additional tool by which she could help others.

Rachel remarks that the technology, where making videos, has progressed greatly in the past few decades. As an example, just fifteen years ago, she needed to use huge machines in a studio or in a room in a building, whereas nowadays people can make a video on their laptop, wherever they are. She remarks that everyone can make videos as time goes on, with the communication eventually being “mind-to-mind.” The biggest market today is for businesses, with their creating content for their customers, with one kind of video being client testimonials.

Rachel remarks that people who make videos should know why they want to make the video in the first place, as a “how-to” video, for example, would be different from one intended to create clients, after which she then recommends that they create a strategy to make the most of the video. Rachel remarks that videos for business give others a snapshot of the business itself and see the person behind the business that they could relate to. She remarks that high-budget videos still exist, but the proliferation of easily accessible technology can enable anyone to create an ad that is similar to the kind that high-cost advertising firms can produce, which is why the latter are now facing challenges.

Rachel has had a lot of experience with clients who have transformed themselves, such as a client that was undercharging whom she was able to help see the value of his work. Rachel, herself, was transformed by video when she created a documentary on elephants, as she had felt insecure about being in front of the camera - and in the documentary, she needed to be in front of the camera.

To those who want to get into the video business, Rachel says that they should have a clear vision for themselves, and then do whatever it takes to get there. She also remarks that one shouldn’t listen to limiting beliefs in pursuit of their goal, then pick a niche that one is interested in and then do it well and charge their worth. Properly mentored, anyone interested in getting into the video industry can become proficient within a few months. 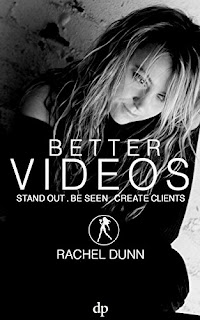 To someone who would want to create videos, Rachel would say, create emotion with the video and share a story about a mistake one has solved. She hopes that people would gain the confidence that they need, and foresees herself writing books about videos in the future, with possible developments that will make videos even easier to make and share. To those who are stuck in anything, Rachel remarks that she asks herself “What would it take to show up?” She remarks that the answer will pop into one’s mind if one just listens to it.

Rachel Dunn’s website for her book, Better Videos: Stand Out. Be Seen. Create Clients, is www.girldirector.tv.

Posted by alvinwriters at 5:10 AM