Eric Walrabenstein talks to Alexander “The Engineer” Lim, host of AuthorStory by alvinwriter.com about his book, Waging Inner Peace: How 5,000 Veterans Used the Ancient Secrets of Yoga and Mindfulness to Reclaim Their Lives from Stress (and How You Can, Too). 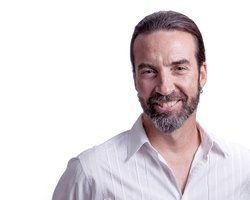 Eric was an officer in the United States army who had already suffered the effects of stress when he was mugged sometime in 1980, from which he suffered from chronic stress for at least a decade after that - something he didn’t recognize at the time, but which resulted in such things as bouts of insomnia, agitation and issues with anger management. The experience was what made him seek out a way to get back to a state of wellness, which led him to meditation and yoga. He had always gravitated towards training, so as he got more involved with meditation and yoga, it was natural for him to share this with others, which was why he took a yoga teacher certification course some four years after starting off in yoga.

Waging Inner Peace is based on the BOOTSTRAP program that Eric created specifically to enable military veterans to cope with the stresses that stemmed from the pressures they experienced while in active service, with Eric noting that the effects of stress on veterans and troops is “catastrophic” and that around 20% of all veterans who had been on active combat deployment suffered from stress-related disorders, according to the US Veteran’s Administration, and Eric calls it “an epidemic.” BOOTSTRAP, which is based on the idea of “pulling yourself up by your own bootstraps,” is a ten-week program that enables those who take it up to better understand the underpinnings of stress, and as more and more people took the program, Eric realized that the principles and techniques could also be applied by non-veterans to their own lives.

The book itself sprang from when the mother of a veteran approached him with her concerns about her son, who was a Marine who had been diagnosed with post-traumatic stress disorder, and was concerned about the situation. This was the impetus for Eric to start thinking about how to reach people who had no physical access to him, and from there, Eric realized that writing the book could impact more people than those he could reach with just his practice, particularly since he found these practices to be particularly transformative in his own life.

Eric notes that there has been a shift in the way society helps veterans deal with stress compared to before, giving the example of a relative who was a B-17 bombardier in World War II who dealt with stress by downing a few drinks and moving on. He notes that being in combat overwhelms the “human” system, and he also notes that stress has an internal component where people are concerned in that people’s responses to a stressful situation differ depending on how they respond to it, with one such example being how the same person can take the stress of traffic in stride one day and become angry, while being in the same situation, on another. He remarks that different people respond to stress in different ways, which is also the reason why some people aren’t affected by what others would deem to be large amounts of stress, while others just need a slight amount of stress to put them into a tailspin.

Eric remarks that stress isn’t an entirely bad thing, noting that “good stress” enables people to grow, such as the stresses people experience when they learn new things, or when they work out in a gym or getting a cold, which only improves a person, but that too much stress overwhelms one’s system, which is what causes problems. PTSD is on the extreme end of the stress spectrum, where people are stuck in a “fight or flight” state which causes the symptoms associated with it, including adverse physiological effects such as high blood pressure. 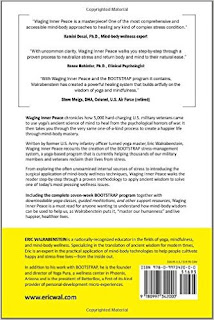 Eric notes that, while yoga seems to be oriented more towards the physical today, it actually springs from the mental and psychological. He notes that BOOTSTRAP essentially enables people to mind their own humanness, which is the essence of managing the stresses people face in their everyday lives. BOOTSTRAP works on how people can help themselves to recover, and Eric also notes that this is not meant to be the sole source of recovery, as other methods - pharmaceutical, therapy - are also necessary. The process helps people understand the internal patterns of thought and attention that contribute to stress, then use specific techniques to interrupt these patterns to bring oneself back to balance. He gave the example of one of his veteran clients who had been struggling with stress and brain injury for years and who, after only four weeks into the program, had been noticed by his therapist to be more alive, relaxed and different in a positive way, with that veteran remarking that, for the first time, he was in control of his own recovery.

One of Eric’s techniques is called “Mindfulness,” which is based on two parts. The first is focused attention, where one brings one’s attention to what is going on in the present, while the second is to focus one’s attention without judgment, or with acceptance, and gave the example of being mindful while being stuck in traffic.

To people who are stressed out, Eric would tell them that they need to recognize that the greatest source of stress comes from within, due to the way we have learned to respond to our circumstances. He notes that a lot of us blame stress on the outside world, but that our own reactions to the circumstances play a part, and that we should be curious about what goes on within us that exacerbates the stress response. 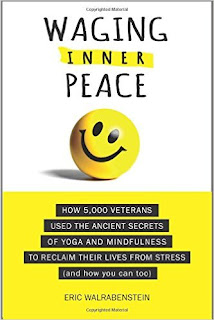 Eric remarks that, when he started writing the book, he was focused specifically on helping veterans deal with stress. This then developed to helping anyone with chronic stress conditions, then evolved to helping everyone, as everybody deals with stress every day, remarking that, according to the Center of Disease Control, 90% of all first visits to physicians stem from stress, which directly affects the nervous system. He notes that managing one’s humanness in a way that enables us to interact with our circumstances and the world around in a way where we can be productive and positive. He notes that we should pay more attention to what goes on within us the same way we pay attention to our physical bodies, giving the regular brushing of teeth as an example.

Purchase from Amazon: Waging Inner Peace: How 5,000 Veterans Used the Ancient Secrets of Yoga and Mindfulness to Reclaim Their Lives from Stress (and How You Can, Too) by Eric Walrabenstein

Posted by alvinwriters at 5:06 PM