Pattie Porter talks to Alexander “The Engineer” Lim, host of AuthorStory by alvinwriter.com about her book, Stop the Dreaded Drama: 55 Tips for Ending Destructive Conflict.

"Be genuinely authentic in saying, 'I want to understand where you’re coming from.'" ~Pattie Porter 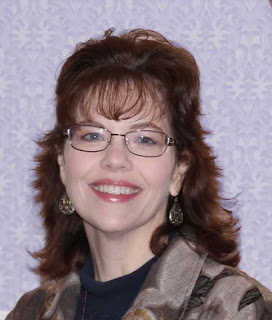 Pattie had experienced a childhood where dealing with conflict was a common experience, as her parents divorced while she was very young and she and her siblings were raised by her grandmother., and Pattie admits that the environment taught her how to avoid conflict early on. Pattie knew she wanted to help people somehow, and some two decades ago, she heard a presenter talk about relations and conflict, and by the end of the presentation, she felt that these were her calling, and since then, she has been studying conflict theory and practicing how to resolve these through intervention. She worked on resolving conflicts after that, and then, after getting her Master’s degree, founded her present company, Conflict Resolutions, Inc., which deals mainly with workplace conflicts.

Pattie had done some work, early in her career, with divorce mediation and found herself dealing with what was essentially the end of a relationship, and she realized what she wanted to do was more along the lines of rebuilding relationships. She hired a writing coach who recommended creating a tips booklet, and over the course of a year the pamphlet became a mini-book in and of itself. Pattie had never considered herself to be a writer, and with regard to the subject matter, she wondered if she needed to bring it out, as there is already a lot of information out in the world regarding conflict. Learning what held her back and realizing what she had to say had value was the main learning of the journey she undertook when writing out the book, as was coming to terms with actually putting the book and its information out into the world.

Analyze the Conflict - take a step back from the situation and see the big picture. Step away from the emotional charging and get an analytical view of what really is going on.

Overcome Conflict Dread - identify some of the underlying triggers that create an intense emotional reaction within oneself that can contribute to the conflict.

Prepare for Difficult Conversations - establish desired goals where resolving the conflict are concerned. Recognize that one needs something from the other party, either for them to do something or to not do something, and figuring out how to articulate those needs to the other party. Get curious about what the other party needs from one.

Structure for Conversation - create a structure / norms / agenda with the other party to ensure that the conversation becomes constructive and productive.

Facilitate the Conversation - bring in a trusted third party if necessary. Don’t bring value statements, such as “should” in the conversation.

After the Conversation - implementation and support of what both parties agreed to. 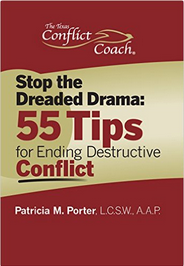 Of all of these phases, Pattie notes that getting perspective is probably the most difficult for people to work with, as the pain that people experience in a conflict tends to override everything else. With regards to conflict resolution and the book, Pattie would like everyone to be educated on the topic of conflict and how they can be resolved, so that we can all grow from these.

Pattie is presently working on two books. The next book she is working on is about conflict avoidance, and the third is on abrasive behaviors, which she notes is the exact opposite of conflict avoidance.Pattie Porter’s websites for her book, Stop the Dreaded Drama: 55 Tips for Ending Destructive Conflict are conflictconnections.com and endingdestructiveconflict.com.

Purchase on Amazon: Stop the Dreaded Drama: 55 Tips for Ending Destructive Conflict
Posted by alvinwriters at 5:20 AM