Dr. Jalaja Bonheim on Making Peace with Ourselves and the World

Dr. Jalaja Bonheim talks to Alexander “The Engineer” Lim, host of AuthorStory by alvinwriter.com about his book, The Sacred Ego: Making Peace with Ourselves and the World. 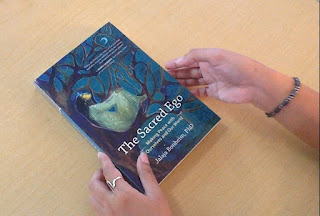 Jalaja Bonheim is the daughter of two Jewish survivors of the Holocaust who grew up in a family of intellectuals in Germany, and as she was surrounded with literature during her childhood it seemed only natural for her to study literature, which culminated her getting her doctorate in German and English literature, and this discipline gave her a good foundation from which she wrote her books (The Sacred Ego: Making Peace with Ourselves and the World is her fifth book). Her involvement with spirituality, sexual wholeness and feminine empowerment began when she went to India to study Indian dance in her 20s, and this exposed her to spirituality and the need for feminine empowerment. Because of this, after she arrived in the United States in 1982, she began working with women who were in dire need of feminine empowerment, be they in the United States or in the West Bank, and as a result founded the Institute for Circlework as a way to support this work. Circles are a method Jalaja developed and as she noted, circles are non-hierarchical, which means that everybody is equal and visible, which enables communication.

From a very young age, Jalaja wondered where violence and warfare come from, particularly after she was taught European history which is, essentially, a series of wars and conflicts over several centuries. She studied various Western psychological traditions as well as various spiritual traditions, and she combined this knowledge with what she learned doing Circles work that the ego has both personal and collective aspects, and that all of the violence stems from the collective ego, of which there is presently little understood about the latter. She also notes that conventional knowledge judges the ego as bad, which is a hindrance to understanding it, as these form barriers to respect and curiosity - two qualities necessary to understand something. 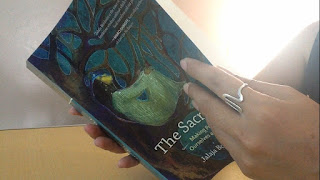 According to Jalaja, the ego is the individual self, and that the ego has enabled us to survive, and if we regard Nature as sacred, then the ego, as a part of Nature, should likewise be held sacred. She notes that the ego is now in need of healing and transformation, as a lot of the ways in which the ego has been conditioned by the collective past is no longer working, particularly the viewpoint of “us” and “them,” which might have worked before but which is presently backfiring.

Jalaja describes three different types of ego in her book. The first kind of ego is the heart-centered ego, which is the kind of collective ego present in the tribal groups that humans have lived in for millennia, and this is typified by her story of Carl Jung’s meeting with an Amerindian, who remarked that the whites think too much with their minds, whereas his tribe thought with their hearts. The second kind of ego is the control addicted ego, which is typical of the civilizations that have created great empires and which is typified by dominance of their particular civilization over others, and even over Nature, and symptoms of this include increasing complexity of society and the inability to calm one’s mind. The third kind of ego is presently emerging, the planetary ego, wherein all humans identify as being citizens of Planet Earth, and that we only survive as members of a planetary community. A practical person that she is, Jalaja has included exercises in the book that readers can do to understand the workability and practicality of the concepts within.

Although this is Jalaja’s fifth book, it was the hardest one for her to write, particularly since she wasn’t clear, at the start, what the book was about, particularly as the ideas came from her intuition, and translating these intuitive concepts into concrete, conscious concepts was one of the challenges she encountered. Writing about the stories, on the other hand, was easy for her, as she admits she loves telling stories, which, she notes, are the most ancient way in which humans learn. 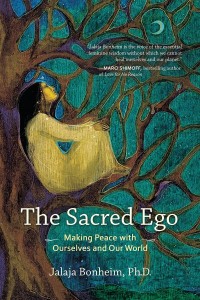 She would like the book to be read by thought leaders who are committed to peace and transformation, particularly the average person, who can become a thought leader in their own right, thanks to connectivity. With regard to future topics, Jalaja admits that she’s got a lot of ideas, and that writing about Circle work is one that presently interests her.

Jalaja loves to dance, and she uses this in her Circle work as a way to connect. She dislikes doing her taxes, as this is indicative of a complicated world. She is also interested in creating Circles using the Internet, and experiencing the love and connectedness of a huge group of people online, from all over the world.

Jalaja Bonheim’s website for his book, The Sacred Ego: Making Peace with Ourselves and the World, is sacredego.com.

On Amazon: The Sacred Ego: Making Peace with Ourselves and the World
Posted by alvinwriters at 8:23 PM