Dr. BS Ajaikumar and How He Created a World Class Cancer Hospital Chain


In this interview, Dr. B. S. Ajaikumar talks to Alexander “The Engineer” Lim, host of AuthorStory by alvinwriter.com, about his book, Excellence Has No Borders: How A Doctorpreneur Created A World-Class Cancer Hospital Chain.

“Anybody can be good. It depends who you are and what kind of passion you have.” ~Dr. BS Ajaikumar 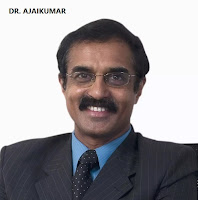 Dr. Ajaikumar’s father was the dean of a law school who had a passion for medicine. Dr. Ajaikumar’s older brother then went into medicine, which was a “gateway” for him to get into medicine, which he had always had a passion for and felt he could make a difference in that field. He had a vision of serving people in the rural areas of India, and while he was one of the top graduates in cardiology he wanted to learn more about the “high end” aspects of cardiology. Since India didn’t offer him that kind of opportunity, he emigrated to the United States, where he became interested in, and challenged by, oncology while undertaking his rotating internship. He thus transferred from the hospital he was then working at, at the University of Virginia, to MD Anderson Hospital in Texas. He made the long trip to the hospital, and despite no opening being immediately available, he impressed the higher-ups enough that they offered him a position, which he took.

Oncology in the 1970s, according to Dr. Ajaikumar, focused on palliative care and wasn’t that well understood, compared to cardiology. He wanted to understand what oncology was all about and improve the methodologies of the field, particularly as few doctors didn’t want to go into the field, due to the mortality rate associated with it. Dr. Ajaikumar liked challenges, and he took this on and met patients from several countries. Practicing oncology in the United States was an enlightening experience for him, and the biggest learning for him was the reflective mindset he learned, and what true friendship was all about, while treating his patients, giving the example of a patient who consoled him before she passed away.

While practicing in the United States, Anderson wanted Dr. Ajaikumar to run the lung cancer program. While that was okay with him, he realized he would remain in academia. As he already wanted to set up cancer centers in India by that time, he went out and set up a center from scratch, and within a few months he was “overloaded” with seeing 150 patients a month - an indication of his success.

Dr. Ajaikumar had long wanted to return to India, during his years practicing in the United States, as he understood what the situation was where cancer treatment was in that nation. By the time he moved back to India, in 2003, shortly after he suffered losses from his stock market investments and after he had set up women’s empowerment programs in India, he had enough technical knowledge as well as experience with setting up a medical center to work on creating medical facilities that gave world-class treatment to cancer patients. (Also driving him to do so, despite his financial situation, was his desire to meet and surmount challenges, a trait which he has had all his life.) He was able to use some of his earnings as seed capital for his first cancer center, which was located in Mysore, and he realized that setting up the center as a non-profit center wasn’t sustainable, so it was then that he looked around for investors.

The investment climate in India in the early 2000s wasn’t “good,” according to Dr. Ajaikumar, with high interest rates and high customs duties. He needed to provide results as an entrepreneur before he could get good investors, and one of the ways he did this was by going to big companies and negotiating for good rates for the equipment he would get. He first made sure his center was running efficiently before looking for investors, and while he received a lot of rejections, he eventually managed to get some investors onboard. Dr. Ajaikumar is up front about returns not being guaranteed, to the point of once turning down a potential investor who wanted 25% return on investment.

Dr. Ajaikumar notes that he never took a grant from the Indian government, as he wants his company, HealthCare Global Enterprises (HCG), to succeed on its own. He works to keep his organization operating in a transparent and legal manner and focuses on doing the right thing for the patient. Where treating people is concerned, he doesn’t deny treatment to anyone, pointing out the cost of a particular service is a fraction of that same service which is offered in the United States and Singapore - a helpful boon in a country where medical insurance isn’t commonplace, which means that people pay for the treatment out of their own pockets. One of the ways he does so is by utilizing the available equipment as much as possible, such as giving treatments late at night, when things aren’t busy. As Dr. Ajaikumar noted, the equipment is already there, so might as well use it, adding that balancing technology, finances and keeping things “patient-centric” are the hallmark of his organization.

At the moment, Dr. Ajaikumar’s unique business model is one which Harvard has taken note of, and has created a case study for. “All the money we generate is put back into the system to bring in more technology and train doctors,” he remarks of his organization’s policy of not giving dividends - a style of management which has enabled HCG to presently create 24 centers in India and Africa. 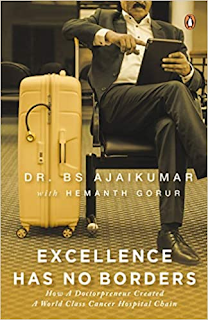 The experiences and challenges he faced throughout his life, as well as those with his son (who has lived for thirty years despite not being expected to live beyond 15 years of age due to muscular dystrophy) were what made him think about writing a book about his experiences. The title, Excellence Has No Borders, was suggested by his son-in-law, who said that, “Where excellence is concerned, there should be no borders.”

He believes that doctors should look upon their patients the way they would a close relative, and that that attitude can carry on where relating to the world is concerned. “If we can contribute, we can make a world of a difference,” he notes, adding that, one should be reflective and be conscious of oneself, as well as have positive vibrations, which aid greatly with interacting with the world and others in a positive way.

Purchase from Amazon: Excellence Has No Borders: How A Doctorpreneur Created A World-Class Cancer Hospital Chain by Dr. BS Ajaikumar

Posted by alvinwriters at 2:16 AM