Paul Smith and Kenny Tedford, Jr. on their Book, Four Days with Kenny (who is partly deaf and blind)

In this interview, Paul Smith and Kenny Tedford, Jr. talks to Alexander “The Engineer” Lim, host of AuthorStory by alvinwriter.com, about their book, Four Days with Kenny Tedford: Life Through the Eyes of a Child Trapped in a Partially Blind & Deaf Man's Body.

“Look at the mirror. You are the greatest hero you could ever meet. You are. Not those around you.” ~Paul Smith and Kenny Tedford, Jr.

(Explanatory Note: Kenny Tedford, Jr., while in utero, experienced oxygen deprivation, which has resulted in him being deaf in both ears, legally blind in one eye and being cognitively impaired. The reason that Paul repeated questions to Kenny throughout the interview was because Kenny was more familiar with reading Paul’s lips than those of the interviewer’s.)

Kenny’s parents had nine children, and Kenny was the only one with issues, as he was born two months premature, as he was taken out once his doctors realized that the umbilical cord was wrapped around his neck. His parents died when he was eight, when he then lived with his uncle and aunt. Just about everyone around him - his uncle, his teachers, the school principal, his childhood psychiatrist - said that he wouldn’t amount to anything. As he was deaf, it was easy for other kids to jump him, and he became the target of bullies due to his conditions. As a teenager, Kenny wrestled, did gymnastics and played football. He learned sign language only at the age of 21, and he remarks that who he is now is essentially his “inner child,” as being a grown up man “doesn’t seem to work.”

Kenny mentioned a story of being called “retarded” when he was in high school, and he didn’t know what the word meant. Two of his friends took exception to that and held down the boy who called Kenny retarded so Kenny could beat him up. Kenny was somewhat puzzled by that, as the boy had insulted him, rather than his two friends, and Kenny figured that, if he was insulted, he should be the one to act on his own. “If I don’t understand what you say or do to me, why should I get mad, ‘cause I don’t know what you’re doing,” Kenny sums up.

Kenny related that one of the incidents that got him started on the road to becoming a storyteller took place in second grade, when he and his classmates were given crayons and told to draw something. Kenny was only given two or three colors of crayons, while his classmates were given twenty-four colored crayons. Kenny’s pictures with the three crayons weren’t that good, but when he was finally given twenty-four crayons to work with, Kenny was able to draw better pictures. One of these was a picture of a butterfly with a woman on it, and when the psychologist asked him who the woman was, Kenny told him that the woman was his mother who would fly around and tell the teacher to give him an A instead of a D. This story was one of the first Kenny began telling, and he’s been telling stories ever since.

Where Paul is concerned, what he got from Kenny’s crayon experience was that, given the proper tools, anyone can create work that would amaze others.

As a child, members of his family would tell him how funny he was, and it took Kenny some time to realize that, instead of laughing at him, people were laughing with him, and his becoming a storyteller grew from there. Kenny also ventured deeper into storytelling by getting a master’s degree in it at the age of 55, and is presently only one of two deaf people to hold such a degree. He got interested in getting a master’s degree in storytelling after getting a bachelor’s degree in theater, when he heard about it from acquaintances, and he had a lot of fun going through the program. Kenny admits that he doesn’t have a particular process for creating his stories, which led to challenges while he was taking up his master’s degree. Instead, Kenny remarks that all he essentially needs to do is to read a story once, after which he can perform that story, with all its characters which, he notes, is different from the way a lot of people approach storytelling as, with the latter, research can be involved.

Although Kenny is deaf, he does get feedback for what he does and what he says from the way the audience reacts, as it does whenever he tells a story. Paul then remarked that Kenny is so good at touching the audience that he, Paul, is professionally jealous. “People like me, but they love him,” Paul jokingly remarks.

Kenny also points out that people aren’t what they have, giving an example from his own personal experience: “I may have had cancer, but cancer didn’t have me.” “It’s not what happened to me, but how I respond to that,” he adds.

For Paul, the elements that make a story worth telling or listening to are: a hero to care about, a villain to be afraid of and an epic battle between them - in more business-friendly language, a relatable main character; a relevant challenge that someone listening might find himself facing someday; and and honest struggle. For Kenny, it’s all about sharing himself, “opening up my heart,” as he calls it, as well as telling the story with love and compassion.

Paul and Kenny got together when they were speaking at the National Storytelling Conference in Covington, Kentucky, in June 2012. They had been speaking in different rooms, and one time, after they had presented, Paul and Kenny wound up sitting right next to each other, with Kenny’s sign language interpreter telling the latter what was going on. Paul was intrigued by the thought of a deaf person coming to a storytelling festival, and it was after lunch that same day that their relationship started.

Kenny admits that he included a lot of trauma and secrets in the book, so much so that he hopes that he’ll “still have family for Christmas.” He also remarks that, with the book, he and Paul are giving the readers the tools they need to be able to live their lives with the same kind of cheer that he does. “I am like I am because of my father,” Kenny further explains. “He loved me as his son, not a disabled son or a handicapped son.”

Paul remarks that Kenny is one of the most unique individuals that he’s met, particularly given how positive Kenny is after experiencing things that Paul admits would have made him bitter. His curiosity about how Kenny could maintain his optimistic outlook was one of the reasons he co-authored the book. Paul also notes that Kenny was agreeable to writing a book, as the latter had always wanted to get his story told, but didn’t know how to write (which Paul knew how to do), so the collaboration worked out well for both of them. Paul also acknowledged that, at the start of the project, he had a mindset which a scientist studying a subject so he can write Kenny’s life story. He quickly discarded that mindset when, after two or three interviews, he realized that he was learning a lot from the disabled Kenny, rather than the latter learning from the able-bodied Paul, during the process.

The title of the book came from the four days that Kenny and Paul spent together, writing it out, during which time the two sat and traded stories “from eight in the morning until six at night.” The idea was Paul’s, and Kenny admits that he thought the idea “insane.” That said, the process worked, and Kenny got another good story out of it when Paul’s son gave Kenny some insight into how a child would see him. Paul’s then-nine-year-old son had to read a book and write a report on it, then create a cereal box, complete with pictures and stories from the book all around it. The boy chose the book Paul and Kenny were writing (the first draft had been finished by then), and after presenting it in class the boy then kept it in his room until he gave it to Kenny.

Kenny hopes the book will help people learn to love themselves, admitting that it’s not easy to do that. “But if I can do that, there’s hope,” he remarks. Kenny also notes that 98% of all parents with deaf children do not know sign language, which results in the deaf children growing up lonely, as they exist in a silent world. Where Paul is concerned, he points to the 27 different life lessons which are listed at the end of the book, with half of these being for people with disabilities and the other half being for the members of the families of such people. 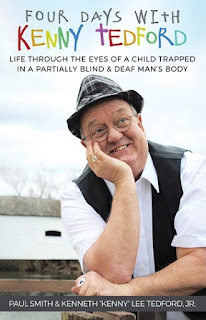 Kenny gave an example of how he views people by telling a story about a wheelchair-bound friend named Marty. Kenny told of a time when he through a door ahead of Marty and wound up closing the door in front of him, as Marty being wheelchair-bound isn’t in the forefront of his thoughts. Kenny only then realized that Marty was left outside in the rain and hurriedly opened the door so Marty could get in. Once inside, Marty then turned his head and began talking to the people around them. Kenny then noticed the people around them laughing, and when he asked what was going on, he was given the reply: “Marty’s making fun of you.”

“I can’t read your lips!” Kenny then complained to Marty.

“That’s because you slammed the door in my face,” Marty then replied.

“Don’t look at someone as if they have a disability,” Kenny then emphasizes, adding that, if a disabled child does something wrong, then he or she should be corrected just like any other child.

“Love yourself,” Kenny gives as advice to those who might be in the same situation as himself. “Just be you.” He also adds for people to be around positive people and get away from the naysayers. “Believe in yourself,” he adds. “Every time you look in a mirror, you’re somebody.”

Purchase from Amazon:
Four Days with Kenny Tedford: Life Through the Eyes of a Child Trapped in a Partially Blind & Deaf Man's Body by Paul Smith and Kenny Tedford, Jr.

Posted by alvinwriters at 6:47 PM