In this interview, Marni Jameson talks to Alexander “The Engineer” Lim, host of AuthorStory by alvinwriter.com, about her book, Donwsizing the Blended Home: When Two Households Become One. 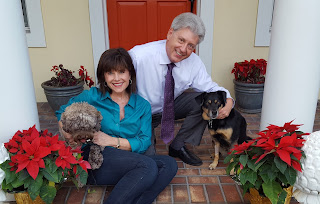 Marni began writing about home design around twenty years ago. In addition to writing a blog about what was going on in her life, she is also a syndicated home and lifestyle columnist. She was always interested in doing home design, but originally didn’t know how to approach doing so. As a journalist, she then began asking people how to do various things related to home design, and this came in handy after she and her first husband broke up, when she became a home stager, which is someone who lives in, and dresses up, a house which would be put on sale. According to Marni, a well-presented house, which is what a home stager works to create, sells faster and for more money. She staged six houses in four years, and the experience helped her out when setting up her own household after her second marriage.

Marni’s parents were moved to an assisted living facility some years back and she blogged about how “heartbreaking” it was to clear out the family home, working to be respectful while, at the same time, deciding on what to throw or give away. It was also around this time when she likewise downsized her own home, as her marriage at that time was unwinding. And after she married her present husband the two needed to blend their households, and this experience led her to writing Downsizing the Blended Home.

A blended household is a household where both partners come from previously established households. (Marni, after the interview, mentioned that: more than 60% of homes in the United States have stepchildren; in one out of five marriages in the United States, both partners have been married before; and in two out of five marriages in the United States, one partner has been married before.) Marni referred to some of her clients who created blended homes, and while most of these did work, some did not, because of the issues related to creating a blended home. She also remarks that she talks to such people as psychologists and designers to make her work stick.  Marni admits that she had her own challenges when creating a blended home with her present husband, as she needed to create a house that represented the both of them, rather than just herself. 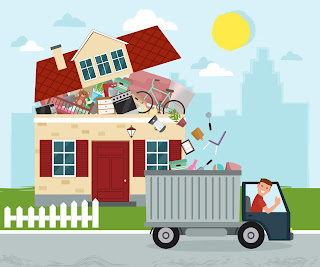 Marni remarks that people get attached to the things they have collected over their lives, and when creating a blended home, both partners can get “contentious” about what to keep and what to release; as she notes, “The fight about the coffee table isn’t about the coffee table.” The goal, Marni notes, is for both people, and their pasts, to be respected in the new house, so that the house doesn’t become a shrine to the past and has space for the future. One partner capitulating to the other doesn’t work, as the capitulating partner will come to a home where he or she feels that something is missing. This means that both partners have to agree on what they are trying to create, together, particularly when it comes to listening to each other.

“Something’s got to give when two people move in together,” Marni notes, and the concern is for people to give up half a house each, and this requires a lot of bending and giving, rather than digging in, which can damage the relationship. She remarks that, for newly-blended newlyweds, it’s best to start by looking for neutral territory where design is concerned, as well as identify one’s own personal style. Marni then gave an example of a design style which would speak to both partners, after which she stressed the importance of sticking to that new style. Both partners should then pick around five items of their own which are non-negotiable, which are that person’s anchor pieces which would represent the person in their new home. Everything else then becomes neutral, and anything then purchased should support the new style.

Marni notes that she has never had “giver-up” remorse over anything, thanks to her experiences, and has learned that, if one hangs on to the past, one leaves no room for the future. She notes that adults being attached to things is the very same thing as children being attached to transitional objects - items which serve as intermediaries for the love and security of their parents or caregivers. Items become endowed with meaning and stories, and it is actually the stories that people have trouble giving up, rather than the item associated with the story. Identifying the story and creating ways to keep the story alive without the actual item itself, such as taking a picture of the item, helps people move on and release things. “If everything’s important, nothing is important,” Marni notes, adding that this kind of attachment is what has created the “epidemic” of storage lockers in the United States. 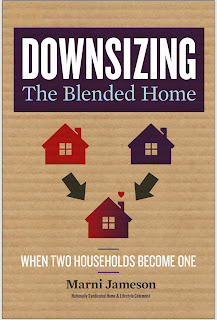 Marni surveyed bookstores to discover that there wasn’t much by way on the topic of creating a blended household, although there were several which covered the topic of blended families, and this was the reason behind her writing Downsizing the Blended Home. She contacted experts to make sure her work was as accurate as possible, and from these has gotten advice which she has applied to her own life. She admits to undershooting her own expectations when she and her husband set up their first blended home, as it didn’t allow her to be able to invite their offspring for gatherings, so she can create relationships which can cover future generations.

For those setting up a blended household, Marni recommends agreeing on a style, then communicating honestly with each other about what will go into that space they will create. “There’s a lot of security in the smaller items,” she adds, noting that everyday items which are touched daily are just as important as the large, obvious pieces. She also notes that people should remember that the relationship comes first, and that the blended household is what the couple is becoming, rather than being who they once were. Marni also remarks that couples actually need to give up more than half a house, as space needs to be created for the future, and recommends getting rid of any beds.

Purchase from Amazon:
Downsizing the Blended Home: When Two Households Become One by Marni Jameson

Posted by alvinwriters at 8:30 PM