Tanya Zabinski on Peace, Love, Action! Everyday Acts of Goodness from A to Z

In this interview, Tanya Zabinski talks to Alexander “The Engineer” Lim, host of AuthorStory by alvinwriter.com, about her book, Peace, Love, Action! Everyday Acts of Goodness from A to Z.

“In life, if you have a vision of what you’re aiming for, then it helps you get there.” ~Tanya Zabinski 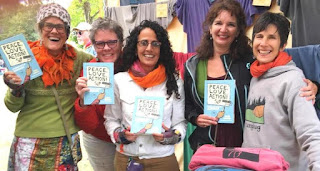 Tanya came from a family whose parents were “alternatively-minded people,” with her father giving her a camera at the age of five and showing her how to develop pictures at that time, which made her aware of such things as visual composition. Her mother was an avid reader who exposed her to literature, yoga and organic gardening, and in childhood her family went camping, which she loves doing to this day, as a way to connect with the land. Tanya had always to become an artist since childhood, and as she got older this felt incompatible with her desire to help others and essentially make the world a better place. This conflict was resolved when she saw a documentary of Isaac Stern going to China after that country opened up to the West, and when she saw how Isaac Stern coached a master class student on how to feel a piece, Tanya realized that she, as an artist, could give a lot to the world as an artist, and then gave herself permission to become an artist.

As an artist, Tanya counts Peter Schumann, the founder of the Bread & Puppet Company in New York, as one of her influences, particularly when combining images with single worlds, as well as his combining art with social justice topics. Peace, Love, Action! is a reflection of Tanya’s attraction to the subject of peaceful activism in its many forms, and is her first published book, which also reflects her love of a combination of stories and illustrations. Tanya reflects that she had always written throughout her life, writing out stories and poetry, and remarked that she has always wanted to be an author-illustrator. Writing Peace, Love, Action! was, for Tanya, a culmination of a life of reading about the lives of people who inspired her. She had originally wanted the book to be one only of illustrations, but then realized that she needed to add biographies and other information gave readers time to dwell on the picture and what that picture actually meant. 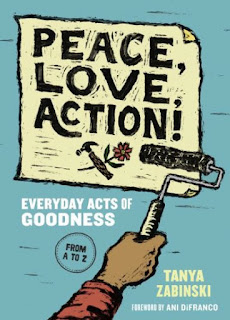 As a person, Tanya had occasionally felt that she wasn’t doing enough, that she was so involved in her own world that she didn’t do anything beyond that, and she shared a story that helped her realize that what she does everyday, in her ordinary life, is something that is worthwhile, that such activities are worth something. Tanya also shared the story of Andrew Bienkowski, whose family was sent to Siberia for two years, and whose mother and grandmother helped him look for beauty in everyday life, as well as how to be thankful for the difficult things in life. Tanya also shared her experience of feeling “not yet there” and of thinking that she would feel good about herself once she became a published author, then shared a story where she realized that she didn’t need to “be there” to reach people and become successful.

When Tanya originally submitted her book to the publisher, the latter wanted her to make the book run along the concept of going from A to Z, which the book originally wasn’t, as well as to eliminate half of the people she already had and to make it more diverse. Where advice is concerned, Tanya recommends that people to take advice based on that which they lean towards, noting that the activists in her book chose what to focus on, as “no one can do it all.” She also recommends people to follow their inner voice, and to not wait for confirmation from the outside world.

Purchase on Amazon: Peace, Love, Action! Everyday Acts of Goodness from A to Z by Tanya Zabinski

NOTE: Author Tanya Zabinski recommends people to find independent bookstores as she wants people to patronize something other than Amazon

Posted by alvinwriters at 9:03 PM