Mike Cardoza Takes You into the Secret World of Debt Collection

Mike Cardoza talks to Alexander “The Engineer” Lim, host of AuthorStory by alvinwriter.com about his book, The Secret World of Debt Collection: Beat Collectors at Their Own Game - A Former Collections Executive Reveals How.

"It's not about you. You’re just one electronic account in a blizzard of millions of other accounts [in debt]." ~Mike Cardoza 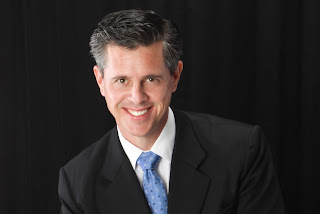 Mike Cardoza is a lawyer whose passions are dealing and interacting with people, “making deals and doing business,” as well as talking to and, more importantly, listening to them. He spent several years in the United States Marine Corps, serving as a trial attorney, and at present is still a reserve officer in that service. He started a company with a good friend of his after he got out of active service in the Marine Corps, a company that bought and collected consumer debt, and then started a debt collection law firm, which they later merged with a large regional collection law firm. He spent seven years in this industry and gained a deep insight into the debt collection industry, and it was while he was here that he noticed that a lot of consumers were unaware of their rights, which collection companies leveraged on. It was this, as well as the realization that there was no coherent source on the nature of the debt collection industry that people could easily access, that prompted him to write the book, which is intended to educate its readers - individual consumers - on the nature of the debt collection industry in the United States.

The debt collection industry runs in the billions of dollars. Mike notes that the credit card is now the main method for conducting peer-to-peer credit, and that credit has been useful in running the economy. Mike notes that debt and credit aren’t bad things, as these help run the economy, as debt “binds people together” into a common trust, enabling them to succeed together in ways that they wouldn’t be able to on their own. He notes that just about everyone uses debt and is using it productively and wisely, such as using debt to fund their education or their house. He also points out that those who are responsible for merging or acquiring companies consider the debt structure when doing so, with too much or too little debt being a possible point of concern, as companies need a certain level of debt to ensure that these are using their resources optimally, particularly when it comes to making that company grow.

The average person’s view of debt, Mike believes, is rooted in a lack of information about personal debt, pointing out that most of such information would come from a relative who would counsel about not getting into more debt than one could repay, as “debt is bad,” with the more thorough classes on debt being offered at the college and postgraduate levels. People thus do not look at debt with the same detachment that MBAs do, and get entangled in such emotions as shame, fear and guilt.

Mike remarks that several laws, such as the Fair Debt Collection Practices Act (FDCPA), have been passed to modify corporate behavior when it comes to debt collection that these favor the consumer, provided the consumer knows what these are. One of the tenets of the FDCPA, for example, is that a company cannot disclose the details of a person’s debt to a third party in order to shame that debtor into paying. He also notes that collection companies are designed to collect money from what he called the “lowest hanging fruit,” which are essentially the people who want to pay anyway.

Where companies are concerned, offering credit cards to college students and people who have newly entered bankruptcy makes good business sense, as college students will eventually land good-paying jobs that would enable them to pay off their debt, and people who have entered into bankruptcy cannot enter into another bankruptcy for a certain period of time. Mike also notes that defaults enable companies to determine the limits of the depth of their market, and that defaults are thus built into the financial structure and business model of companies. 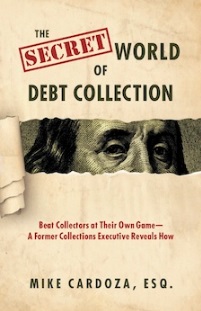 As Mike notes, only around five percent of the population of the United States is in default in their debt at any one time, and Mike’s advice to someone who is called up by a debt collector is to realize that it’s not about them, and that vague generalities will be used to spook a defaulter to pay up. He also mentions that there are a lot of attorneys who would be willing to handle a consumer’s case for free, as the laws provide for payment of attorneys’ fees.

Mike indicates that he wanted to explore the subject of credit reporting, as this is a growing industry (as of 2015). He notes that Consumer Reporting Agencies (CRAs), for example, handle a lot of information which could lead to concerns about electronic privacy.

Mike admits that he’s just a normal a person just like any other, who also has times when he is down, and his greatest joy is in using his natural gifts to help others.

Purchase on Amazon: The Secret World of Debt Collection: Beat Collectors at Their Own Game - a Former Collections Executive Reveals How (Paperback)
Posted by alvinwriters at 8:27 PM