John McQuaid Reveals the Secrets of Flavor & Taste of Food

John McQuaid talks to Alexander “The Engineer” Lim, host of AuthorStory by alvinwriter.com about his book, Tasty: The Art and Science of What We Eat.

“There’s all these variations among populations and among people in what people can taste that we’re just beginning to understand.” ~John McQuaid John had worked for the New Orleans Times-Picayune as a reporter for over twenty years, and in that time has shared in three Pulitzer Prizes stories he had written, and after that he went off on his own to investigate environmental issues that he was interested in. He got involved with the subject of taste after getting burned out on reporting about disasters and the environment and wanted to investigate a topic that was more along the lines of pure scientific research.

John became interested in taste when he discovered that his son preferred spicy food and his daughter preferred comfort foods, and he wondered why, as his two kids were raised in the same environment, their tastes were extremely varied. He always had an interest in how things worked and had been inspired by the book, The Dragons of Eden by Carl Sagan, and combined his interest in science with his ability to tell stories to create his career as a reporter, among which was an accurate projection of how a super-storm would affect New Orleans three years prior to Katrina hitting the city.

Where taste is concerned, thanks to recent research, our knowledge of taste has progressed beyond the tongue map, which John notes, was based on a scientific mistake committed decades earlier. More sophisticated molecular biology techniques have been developed in the past two decades, research which springs from research on the human genome (DNA), and which have created a revolution in research on taste. The decreasing cost of technology, along with a renewed interest on taste, is currently playing a big role in this research and this, along with interest in companies in developing food products that will better appeal to consumers through the way these taste, helps drive the discovery of new information on the subject.

According to John, one of the discoveries of taste research is that, while we humans only have a handful of sweet receptors in our genes, we have around two dozen where bitterness is concerned. Not everyone, it must be noted, has all such receptors, with John himself being an example, as he doesn’t have one type of bitter receptor and thus does not taste that kind of bitterness. That said, taste also has a cultural component, as John notes that humans may be inherently aversive to spiciness or hot chilis but certain cultures and people can learn to overcome and actually enjoy this particular taste.

Taste has always been useful to humans, particularly as hunter-gatherers. John notes that in the developed world, some people remark that taste has become somewhat of a liability due to the readily-available presence of good-tasting foods on the market that have little by the way of nutrition the way it’s supposed to be. 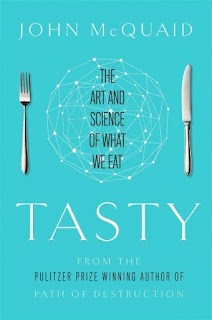 Where his book, Tasty, is concerned, John sees it as more of a window into present research into taste and expects it to become somewhat obsolete in the next ten years due to the increasing amount of information that comes out of research being done on taste. He does hope that readers will think differently about the food they eat and about taste after they do read his book, which should appeal to foodists and those in the business of food preparation.

John notes that he has become more aware about the food he eats where tastes and flavors and the associated sensations are concerned. His favorite kinds of taste are on the strong side, such as espressos and single-malt scotch, and the taste he dislikes is that of anchovies (because of their strong fishy taste) and liver. He wants to explore the link between taste and emotions in the future. Beyond Tasty, he is also interested in important environmental issues where the understanding on these is not yet clear, as well as international development, such as fighting diseases where a combination of human effort, technology and policy can make a difference.

Purchase on Amazon - Tasty: The Art and Science of What We Eat

Posted by alvinwriters at 5:59 AM

Email ThisBlogThis!Share to TwitterShare to FacebookShare to Pinterest
Labels: alvinwriter.com, author interview, AuthorStory, being a writer, being an author, books, culinary history, inspiring story, John McQuaid, Tasty: The Art and Science of What We Eat, writing inspiration