Carole Morton Guides You Towards Self Love, Inner Peace, and Happiness

Carole Morton talks to Alexander “The Engineer” Lim of AuthorStory by alvinwriter.com about her book, Entering Your Own Heart: A Guide to Developing Self Love, Inner Peace and Happiness.

Carole Morton was raised under abusive circumstances, and at the age of ten she had a vision of herself speaking in front of hundreds of people and that, after she spoke to them, they would love themselves more. The road to that vision wasn’t easy, given that she confessed to being actively suicidal at age ten. When she grew up, she got involved with the women’s movement and entered law school with the intent of helping others. She then moved to counseling and communication, hosting a TV show to help raise consciousness, and her interest in intrapersonal communication led her to becoming the psychotherapist she now is.

It was during the vision she had at the age of ten when she promised herself that she would write a book, and that she would give herself fifty years to learn how to do so. The book is intended for a general audience, and while she drew on her personal experiences, she also drew from the experiences of other people whom she dealt with for three decades of practice. She also included inspirational quotes from everyday people, as the book is intended to inspire the reader and enable the latter to listen to their own, internal wisdom.

With regard to meeting clients, Carole points out that psychotherapists are trained to meet these where they are, so that they feel they have been seen, heard and accepted for who they are at that moment She also mentioned that psychotherapists need to respect, understand and care for their clients as they are, because the latter are judging themselves and don’t accept and love themselves as they are. The work is thus more of a journey of learning, and the psychotherapist becomes more of a guide than a teacher to the client, so that the latter can recognize and overcome their blocks to loving themselves and then moving on from wherever they are stuck in. Entering Your Own Heart itself is a journey, and as Carole notes, the reader has to do some of the work, as it is not the kind of book that one just reads and then puts down.

Carole’s methodology relies upon the integration of scientific and spiritual methods because, as she says, the scientific and the spiritual are intertwined in the lives of people, rather than being separate, and understanding the interrelationship enables one to grow and to heal. For Carole, spirituality isn’t about “some man in the sky,” but as connection between and within oneself and everything else; and the biggest block to that connection is judgement. 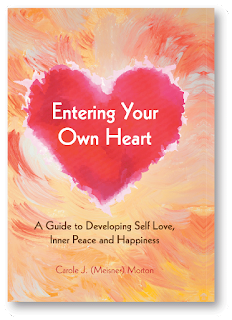 Carole’s ultimate vision for all the work she does is that everyone loves themselves more, and with regard to what part of her life she would like to stay in forever, Carole said that where she is right now is a good place for her to stay in forever, because of all the peace she has attained to this point.

Where purchasing the book is concerned, Carole would much prefer that people purchase it from the book website itself, enteringyourownheart.com, as ten percent of the proceeds go to a charity that helps street children in Calcutta.

Purchase on Amazon: Entering Your Own Heart: A Guide to Developing Self Love, Inner Peace, and Happiness
Posted by alvinwriters at 12:13 AM